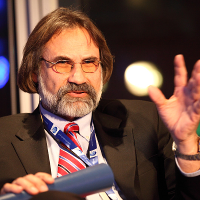 Since its launch in 2001, the Global Carbon Project (GCP) has worked in close collaboration with IIASA. The Institute has co-hosted a series of workshops with the project, and scientists from IIASA research programs, including Energy, Ecosystems Services and Management, and Advanced Systems Analysis have been closely involved in GCP’s research and other carbon-cycle related activities.

Prior to his appointment as co-chair, Nakicenovic had served two terms on the scientific steering committee for the GCP. He says, “This appointment will open up new opportunities for collaboration between IIASA and the GCP, strengthening our close connection to the project and helping to foster a better understanding of the global carbon cycle.”

The GCP was formed to assist the international science community to establish a common, mutually agreed knowledge base supporting policy debate and action to slow the rate of increase of greenhouse gases in the atmosphere. It focuses on improving the scientific understanding of the carbon cycle, by bringing together interdisciplinary and international researchers.

The carbon cycle—how carbon moves through the atmosphere, biosphere, oceans and other Earth systems—is key for understanding climate change dynamics, and it ties into a variety of IIASA research. IIASA research in land use, land-cover change, water and energy all connect to carbon cycle dynamics and are an integral input for the GCP.

IIASA Guest Research Scholar Sabine Fuss, whose primary appointment is at the Mercator Research Institute on Global Commons and Climate Change, has also been appointed a member of the GCP scientific steering committee.