IIASA Director and CEO Pavel Kabat visited Moscow from 9 to 15 September 2012, to meet with IIASA network members in the Russian Federation. 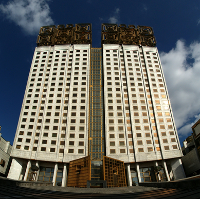 During his trip, Kabat visited the Russian Ministry of Science and Education, the Ministry of Foreign Affairs, the Analytic Center for the Government of the Russian Federation, as well as a number of institutes within the Russian Academy of Sciences, including the Committee for System Analysis, the Institute for Water Problems, and the Institute of Scientific Information on Social Sciences.

On 13 September 2012, Kabat spoke at a press conference at the Institute of Scientific Information on Social Sciences, part of the Russian Academy of Sciences in Moscow. Kabat will discuss the role of the Russian Federation in IIASA’s new initiatives, including the establishment of a global think tank of leading politicians, Nobel Prize-winning academics, and CEOs. He also discussed the role of the Russian academic community in IIASA-organized global research projects, including the Global Energy Assessment and the upcoming Global Water Futures Assessment.

On 14 September, Kabat gave a public lecture at Moscow State University entitled “Systems Science for Policy Support,” in which he discussed how broad-thinking interdisciplinary science like that done at IIASA can contribute to better public policies.

IIASA and the Russian Federation

Russia has been a key member of IIASA since the Institute’s formation in 1972, and was instrumental in the formation of the Institute. The idea of IIASA came out of a series of discussions between the United States and the then Soviet Union, including Premier Dr. Alexei Kosygin and Academician Jermen Gvishiani on the Soviet side, and President Lyndon B. Johnson and his National Security Advisor, McGeorge Bundy from the United States.  Following the dissolution of the Soviet Union in 1991, the Russian Federation continued their membership, designating the Russian Academy of Sciences as its National Member Organization.

IIASA maintains a number of key research collaborations with Russia, in particular in the fields of forestry and land management, energy and climate change, and population research. For example, IIASA has collaborated with the Russian Federal Forest Service to help map the vast forests of Russia, providing important data on carbon uptake and storage in forests. Researchers for IIASA’s Greenhouse Gas and Air Pollution Control Synergies (GAINS) model have built an instance of the model specifically for Russia, which aims to inform policy planning in Russia. Russian researchers also contributed to the Global Energy Assessment, a major research initiative that provides a comprehensive look at the world’s energy challenges and possible solutions.

IIASA works closely with the Russian Federation on capacity building and training efforts. IIASA researchers regularly work with Russian partner organizations to provide training workshops in the country. IIASA also hosts young researchers in the form of post-doctoral fellowships and IIASA’s flagship training program, the Young Scientists Summer Program (YSSP). 190 students from Russia have participated in the YSSP since it started in 1977.

IIASA is an international scientific institute that conducts research into the critical issues of global environmental, economic, technological, and social change that we face in the twenty-first century. Our findings provide valuable options to policy makers to shape the future of our changing world. IIASA is independent and funded by scientific institutions in Africa, the Americas, Asia, and Europe. The IIASA council currently consists of the following countries: Austria, Brazil, China, Egypt, Finland, Germany, India, Indonesia, Japan, Republic of Korea, Malaysia, the Netherlands, Norway, Pakistan, Russian Federation, South Africa, Sweden, Ukraine, USA. previous.iiasa.ac.at

Bulletin of the Department of Earth Sciences, Russia Academy of Sciences

Subscribe.ru: The collapse of the Soviet Union and the transition to a market

Analytical Center of the Russian Federation