IIASA research brings a new perspective to assessing whether and where disaster risk management provides for economic benefits. 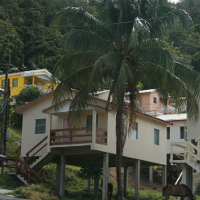 The researchers found that by modeling the probability of disasters and their costs, both human and monetary, along with the potential costs and benefits of advanced risk reduction efforts, researchers can provide better information for policymakers about which efforts will pay off.

The study, a collaboration between IIASA and researchers in the United States and United Kingdom was originally carried out for a joint World Bank and UN report. The researchers conducted two localized case studies in disaster hot spots, examining earthquake risk for houses and apartment buildings in Istanbul, Turkey, and hurricane risk for structures on St. Lucia, a highly exposed Caribbean island. The study examined the probability of hazards and disasters occurring along with the costs of risk reduction measures.

For example, St. Lucia lies in the way of hurricane paths and many houses on the island are vulnerable to hazards depending on where they are located and how they are constructed. The case study examined the costs and potential benefits of retrofitting houses to better withstand high winds and flooding. One finding is that when considering the high costs of retrofitting as well as the probabilistic benefits of risk management, the cost-efficiency of this risk management option depends critically on taking a long time horizon (which implies a low rate for discounting the costs and benefits). In a second case study, the researchers examined the potential costs and risks of a major earthquake near Istanbul, Turkey, an event which experts say has a 30-60% chance of occurring in the next 25 years. The case study shows that only when the reduction of loss of life is considered as a benefit, did the risk reduction measure pay off.

IIASA Risk, Policy, and Vulnerability researcher Stefan Hochrainer-Stigler worked on the study. He said, “The research combines state-of-the-art catastrophe modeling with detailed on the ground analysis, which has not been done at this level of detail.  At the same time, the study also showed the need to critically reflect upon important and difficult modeling choices involving ethical consideration, such as the importance given to future generations as well as considering intangible impacts.”