Can humanity switch from emitting massive amounts of climate-warming gases, to instead removing them from the atmosphere? International researchers discussed the potentials and challenges for negative emissions this week at a meeting co-organized by IIASA and the Global Carbon Project. 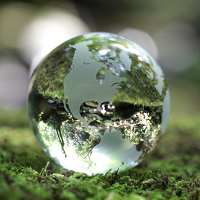 Globe in the forest © Flynt | Dreamstime.com

More and more, researchers say that targets for climate change may be slipping out of reach. In order to limit climate change to 2°C above pre-industrial levels, many scenarios suggest that emissions will not only need to drop to zero, but eventually to become negative – that is, human beings will need to begin removing greenhouse gases from the atmosphere. But the technologies required to transition to negative emissions remain a big question mark.

How much would these technologies cost? How quickly can they be deployed? And what will the impacts be? In the meeting this week at IIASA in Laxenburg, researchers from the Global Carbon Project (GCP),  IIASA,  and other institutions presented the latest research into the potential impacts of negative carbon technologies

“What we’re exploring here are new mitigation technologies to bring emissions to stabilization,” says Pep Canadell, Executive Director of the Global Carbon Project (GCP), who led the meeting along with IIASA Deputy Director Nebojsa Nakicenovic. Canadell says, “We need to not just decarbonize fossil fuels and introduce other emissions free options but in addition take carbon out of the atmosphere through negative emissions and sequester it underground.” 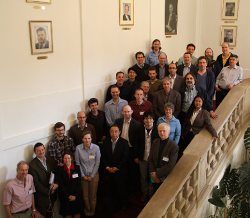 Workshop participants met from 17-19 April at IIASA in Laxenburg.

The meeting this week focused on Bioenergy and Carbon Capture and Storage (BECCS), a yet-unproven system that would produce energy from biofuels and then trap the resulting emissions using sequestration technology. While attractive in theory, there are a few major hurdles to getting BECCS going on a large scale. Canadell says. “Ultimately you would need a massive production of biomass, with a massive deployment of new technology, and match that to new carbon sequestration sites.”

During the two-day workshop, researchers presented relevant findings and participated in discussions, for example on how much negative carbon emissions are required and how long we can wait to act and still meet the 2°C target. They also discussed details and uncertainties in the carbon cycle, the biogeophysical system by which carbon flows in and out of the atmosphere, vegetation, and associated land, water, nutrient requirements, and the flow of the ocean. Other questions included how much biofuel could be produced sustainably, while also maintaining adequate food production for the world’s population

The group plans to write a synthesis paper to present the opportunities, challenges and required policies for implementing negative emissions.