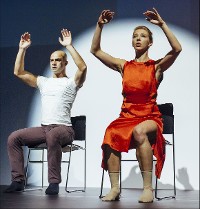 “Democracy thrives on civil debate, but we're shamefully out of practice”, the political philosopher Michael Sandel observed in 2010. The need to revive and improve the current culture and format of debate in order to rejuvenate democracy, is itself increasingly “debated.” COURAGE was an experiment to identify relevant questions, analyze problems, search for solutions, and engage audiences - in this case through an artistic process involving scientists and resulting in a performance debate.

1. The quest for a good question

Gloria Benedikt, a research associate for science and art at IIASA, sought to identify pressing questions with a group of IIASA scientists in summer 2016. They were asked to read two books, Flourishing within Limits, and Lilith and the Daemons of Capital for inspiration. Coauthors of both books, IIASA research scholar Brian Fath and the journalist Oliver Tanzer were part of the project. The group discussed what they perceived as the most pressing problems, the role of science in solving them, and what prevented progress. Six questions emerged and one was picked to form the basis of the performance debate:

2. Composing text for the video installation

The scientists wrote a text providing their analysis that led to the question. Their challenge was to drop the jargon to make it accessible to a general audience and to compose a piece that all the scientists involved, regardless of their discipline, agreed on and were able to deliver convincingly on screen.

Scientists were coached by a former television journalist on how to deliver content convincingly for camera. The video installation was then shot against a black screen to add a theatrical frame to the delivery of their message. During editing, special effects—such as a cloud to signify the crash the scientists were describing—were added and the installation was set to music.

To prepare the context for the video installation and debate question, a theatrical text about the relationship between people and nature, describing humankind as both “conquerors and gardeners of planet earth,” was written and recorded. A choreographed dance and music accompanied the text recording.

5. Choosing and briefing the debate cast

The debate cast was chosen from participants of the Alpbach-Laxenburg Group, a high-level retreat of the Political Symposium of the European Forum Alpbach. The cast was briefed and asked to prepare a short statement reflecting on the question. Two days before the premiere, the debating cast members attended rehearsals and were given direction on their entries. For the finale, notes from the audience were read out while the artists joined them on stage, so that performance and debate came together as one.

6. Choreographing dance sequences and directing all components together

Starting with the ticking of a clock, signifying “the race against time” the dancers’ choreographed movements inspired by the texts to come.

Part II: The recorded text, amplified by the dancers’ movements (4 min). The dancers, predominantly sitting on chairs like panel members, use their arms, head and upper body to physically translate the text.

Part VI: Debate and art coming together on stage.

Typically, people listen to a debate, perhaps find it interesting, maybe learn something new, but feel that it does not concern them, that there is nothing in their own lives that they could change based on what they learned. Yet a sustainable future will only be possible if we all internalize sustainable thinking and change our behavior accordingly. Two components were added in response to that need. First, the audience was asked to write notes during the debate, which were collected and read out on stage by the debaters during Part VII. Second, the composer Merlijn Twaalfhoven encouraged the audience to hum in order to create a sense of collectiveness, so audience members sense that they are not passive spectators, but play a role in what has been discussed, and that we are “all in this together. 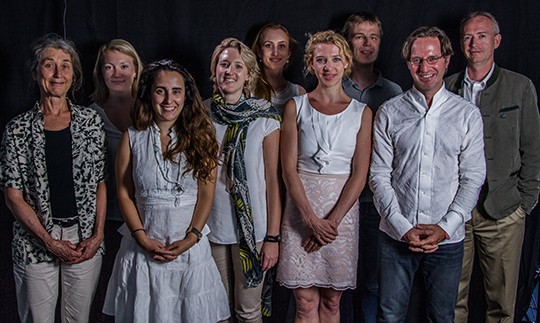 “Taking part in COURAGE during the Young Scientists Summer Program (YSSP) at IIASA was a unique experience. As an interdisciplinary, international, team of scientists, journalists, and dancers we were confronted with our different working styles when writing the screenplay. While scientists are used to producing precise facts, on stage creativity and spontaneity are needed. It allowed us to ask questions in an unconventional way and embark on a process of unaccustomed freedom.”

“Participating in COURAGE was an immensely satisfying experience. Part of the pleasure was watching the production unfold from an inchoate and novel concept regarding a discussion of two books to the final performance involving dance, video, dialogue, debate, and music. The preparatory discussion among the scientists forced us to think deeply about the key ideas we wanted to communicate to the audience and how to distill them into visual cues. I have used the video in my classes several times and the students were captivated. It really is a striking way to merge art and scientific discourse.”

COURAGE premiered at the Political Symposium of the European Forum Alpbach on 30 August 2016 and was also live-streamed.

After the performance, audience members said that it had provided a door to both art and science and allowed them to understand the discourse on sustainability better.

The following year there was increased interest in deviating from the classical debate format throughout the entire symposium. This is an example of the artistic mindset, applied to the need to improve public debate, delivering new approaches. These kinds of collaborations may provide the new solutions we need; as Einstein observed: “You can’t solve a problem with the same mind that created it.”

A summary of the performance debate was edited and distributed via social and other digital media. COURAGE was also featured as a highlight in the European Forum Alpbach Impact report. COURAGE was invited to the European Commission’s Joint Research Center in Ispra in 2016, and the Stockholm Act, a cultural festival initiated by the Stockholm Resilience Center, in 2017. It serves as an inspiration for reviving the culture of debate and features the same artists but new debaters every time.

Through the research process, the artists were exposed to the precision scientists are accustomed to when formulating questions and composing texts. Through the artistic creative process scientists were challenged to focus not only on substance, but also on the delivery of their message. Given that the result was a live performance, they also had to trust that the artists on stage as well as the debating cast would frame their work adequately. A total of 14 people from across disciplines came together for this production, and although each of them was prepared and committed to do their best, the only way to succeed was to trust each other, and, for those live on stage, to be alert and responsive to each other. While this is a reality in any theatre production, it is the opposite of a scientific publication, where every word is revised multiple times before publication.

One could say that neither artists nor scientists are trained to articulate themselves well to a general audience. Both assume that their complex ways of thinking will be understood, when often they are not. Through the process of creating COURAGE, scientists and artists were challenged to deconstruct their expertise to a level where they could meaningfully connect and make their knowledge and skills accessible to the audience. The process also revealed the potential for artists to learn from scientists to follow their intuition in a more systematic manner and to become more articulate, and for scientists to focus more on their delivery, rather than merely the substance, and to learn from artists to allow an element of uncertainty, grounded in trust. Addressing delicate issues through art combined with science will hopefully support the global transformation to sustainability by creating openness, enabling people to look at topics from different perspectives, to question their beliefs, and to compel them to act when presenting them with rational data and analysis alone cannot. However, to better understand the impact such a process has on the work of scientists and artists themselves, more work will be needed. 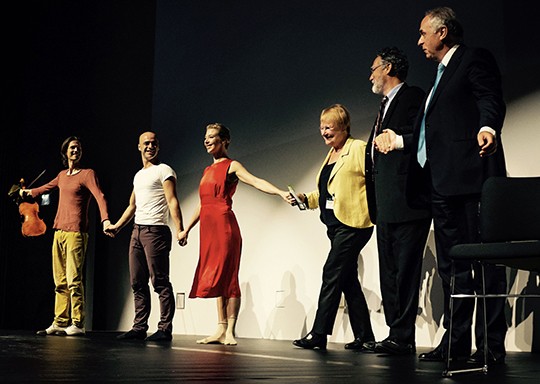 “There is a fundamental need to recognize, nurture, and re-energize a symbiotic relationship between science and the arts. Great science, like great art, comes through a mix of inspiration, hard work, precision, thoughtful/mindful focus, and diligence. Both can and must inspire, infuse, energize, and give form to the other. Great scientific breakthroughs often come via conceptual and abstract inspiration. Gloria Benedikt’s inspiring performance captured these concepts, weaving them into a conceptual dream that gave new meaning and focus to some of the biggest systemic challenges of our time.”  Daniel McMurray, audience member