A boat full of people who have fled their homes is permitted to dock. We know thatmany more such boats will come. What do we do?

In what ways can artists and scientists explore this real world dilemma together and come up with a new approach to guide the audience through a solution finding process? 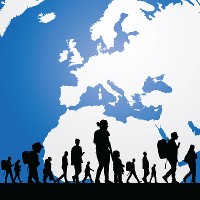 Every two years, IIASA and the European Commission’s Joint Research Centre (JRC) bring together researchers and policymakers to learn how to optimize the use of scientific evidence in policymaking. The topic of the 2018 event held under the auspices of the Austrian Presidency of the Council of the European Union, was migration and demography–specifically the role of population dynamics and migration for sustainable development in the European neighborhood. This occasion, coupled with the increasing urgency to address current affairs, inspired the development of a research project involving artists and scientists in exploring the current debate around migration through the lens of diverse and often conflicting worldviews, while involving participants in experimenting with a new approach to solution finding.

Innovation: There are deeply rooted differences in the current debate on migration. The cultural theory of risk, which takes the different worldviews people naturally have into account, proposes that sustainable solutions must also take all these worldviews into account. This prompts the question of whether insights gained through this approach could become more tangible if the theory is transmitted through a physical theater play.

Impact: The impact of this approach is achieved by means of a participatory exercise. The process involves the audience and guides it through a solution finding process based on insights gained from looking at the current migration debate through the lens of different worldviews.

B. Preparation: Identifying the topic and structure

Gloria Benedikt, IIASA Science and Art project leader and Piotr Magnuszewski, research scholar in the Risk and Resilience and Water Programs, met to discuss the preliminary structure of the piece. It was decided that the first part would convey the current debate on migration through different worldviews. This required a playwright to compose the text and create three characters to embody the three main worldviews (egalitarian, hierarchical, and individualist). The aim was to present a real-world dilemma related to migration. From this it followed that the second part of the piece would require the audience to propose a solution, which the artists would then enact to see whether it works.

Benedikt assembled the artistic cast. Nour Barakeh – herself a migrant from Syria with a background in art and science – was cast as the ‘egalitarian’. Hannah Kickert, a former Vienna State Opera dancer and student of political sciences, represented the ‘hierarchist’, while Benedikt embodied the ‘individualist’. The Hungarian choreographer and theater maker, Krisztian Gergye, portrayed the leader of the migrants. Research artist Chantal Bilodeau, who is well known for her theater plays on climate change, took on the role of playwright.

Benedikt also discussed the piece with researchers Wei Liu from the Risk and Resilience Program and Guillaume Marois from the World Population Program. They prepared presentations for the kick-off workshop. 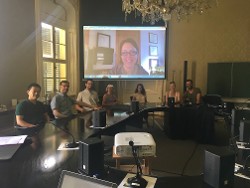 The full cast and advisors assembled for the first time during the kick-off workshop. Fittingly, all eight individuals were, or had at some point been migrants themselves and hail from six countries: Austria, Canada, China, Hungary, Poland, and Syria. In a warm-up round, they told their stories about migration and attempted to summarize the stance of their respective countries on the subject. In the second round, everybody was asked to share media clippings they had recently come across. The purpose of this exercise was two-fold. First, to get to know each other and second, to discover the various situations in which the term “migration” is used. It was particularly interesting to see that all of the artists, independently of each other, emphasized the human dimension, that is, that the migrant is commonly depicted as a faceless shadow rather than as a person, and that they hoped to give this abstract figure a human form.

In contrast, from the scientific perspective the focus was more on a long-term trajectory, looking at the movement of people from one place to another with the intention to permanently or temporarily settle in a new location. The team explored ways in which they could combine these two viewpoints – the scientific and the humanistic – and go deeper than current media coverage that tends to focus on singular events – symptoms rather than root causes. In addition, they considered ways to better engage the audience in pursuit of a sustainable solution that takes into account humanitarian, economic, and social aspects. 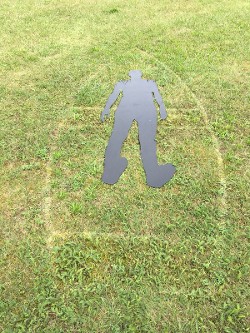 Guillaume Marois from the World Population Program provided an overview of the latest migration data and Wei Liu explained the different worldviews according to cultural theory. Based on this background knowledge and a real-world scenario (a refugee boat being permitted to dock), the group brainstormed how the situation would be perceived and proposed potential solutions based on each worldview.

Chantal Bilodeau, who joined the meeting via Skype from the US, took notes throughout the meeting after which she had one day to come up with a first draft of the script.

In this phase of the project the team focused on the development of the choreography for the piece. For the opening scene, the artists started by exploring different ways of moving in order to portray the different forms of migration.

For example they explored how to depict people moving out of curiosity vs. people moving out of fear. With Bilodeau’s text, the artists then developed the opening scene, which gives a brief overview of human migration throughout history and then transitions into a choreographed dialogue representing the three worldviews. The cast and playwright adjusted the script based on the choreographic and scenic needs of the piece to ensure that all parts fitted together.

It became clear that a group of extras would be needed to represent the migrants on the boat. Extras for the performance were recruited from among IIASA scientists who were briefed on the course of action for the piece prior to the performance.

The challenge: The interactive “gaming” part of the piece starts with a challenge–a ship with migrants (extras led by one of the artists) trying to get to Europe. The government of a European country – represented by three other artists – need to decide what to do with them, in other words, they have to decide which solutions to opt for. The audience is asked to suggest possible solutions that would address the challenge, not just as a one-time solution to a crisis, but as a sustainable course of action that takes into account that such ships will be arriving regularly in the future.

Forming uniform groups: The master of ceremonies (MC) asks the audience to move to the indicated spots corresponding to one of the worldviews (represented earlier by the artists) that is closest to their way of thinking/feeling. Then, the MC gives participants five minutes to discuss potential solutions within each of the big groups representing different perspectives. These discussions take place in smaller breakaway groups, each containing at least one participant with email access on their smartphone. Participants submit their solutions by sending their ideas to an email address () created for the performance.

Solution seeking in uniform groups: During the discussion, facilitators distribute selected printed media notes with conflicting (sometimes radical) opinions on immigrants among the participants. The leader of the migrants (the artist) then additionally engages participants 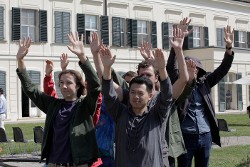 based on this news. The MC selects one solution from each perspective (worldview) and these are then sequentially enacted by the artists. The solutions are ‘enacted’ on migrants, for example, based on proposed criteria some migrants are sent home, while others are invited to stay. Since all solutions are proposed against the backdrop of specific worldviews, the government (artists) cannot agree on any of the proposed solutions–there is always at least one other artist who strongly disagrees. In this way, it becomes clear that another approach is needed.

Solution seeking in mixed groups: The MC asks the audience to form small mixed groups with all perspectives represented in each group. These new groups search for compromise solutions. The new ideas are submitted (again) via email, and one selected ‘best inclusive solution’ containing elements from all worldviews is announced by the facilitator. Similar to the first round of discussions, the selected media notes with conflicting (sometimes radical) opinions on immigrants are distributed among participants, and the leader of the migrants engages participants based on this news. The final solution is interpreted by government members (artists) and enacted with some friction between the artists. Ultimately they however manage to find a compromise solution that all of them can agree upon.

“Data alone cannot be the only tool to reach people in making a change.
Migraspectives was a journey for all of us to find out how we can bridge the gap
between researchers, policymakers, and society.“
Nour Barakeh, Cast Member

Migraspectives premiered in the Paradise Garden of Laxenburg Castle where IIASA is
based on 5 September 2018. In the audience were researchers and policymakers from
40 nations who participated in a three-day summer school on evidence and policymaking.

The Migraspectives performance created a unique opportunity for participants to not
only observe, but also deeply and meaningfully engage in the migration debate. During the performance, participants followed the steps suggested by the facilitator. Participants gathered in small groups, where they engaged in thoughtful and intense discussions. The boundary between the “game reality” and real life was blurred . Following a controversial statement in one of the groups, for example, a participant asked: “Are you serious or are you acting?” In another group, one of the participants was so emotionally concerned that “we cannot take them all” that other participants had to reassure her: “Look, it is just a game”. From a social science perspective, it was interesting to observe that all groups acted consistently with their worldviews. When the leader of the migrants tried to engage them during discussions, the “individualists” turned their backs and didn’t even notice that migrants were asking for help. The “hierarchists” were looking in the direction of the migrants, but were also ignoring them, in a way, looking ”over” them.

Finally, the “egalitarians” were the only ones that reacted with some eye contact. However, throughout the performance, all of the participants were walking through the migrants' group without interacting with them in any way. Only one of more than a hundred participants joined the migrants for some time. This confirmed a consistently observed real-world pattern namely, where policymakers discuss solutions without engaging with the affected groups. For extras playing the roles of migrants, it was a moving experience, where in spite of the audience’s best efforts, they felt ignored and neglected. For most of the participants, this provided an opportunity to feel many pressures related to making important decisions that could have significant consequences for human lives. 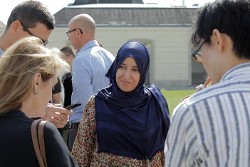 All participants at the IIASA JRC Summer School were asked to evaluate the sessions presented over the course of the event. The response rate was 97%. Migraspectives was rated one of the top two sessions.

The premiere was recorded and a summary video distributed on social media. Sequel performances are currently being planned.

How might this work support the global transformation towards sustainability? According to cultural theory, sustainable solutions include different worldviews. Migraspectives showed that theory turned into art and connected to a participatory exercise can help experts and non experts alike to understand the complexity of a problem and strive for balanced solutions, which is a prerequisite for sustainability.