Founded to promote East-West scientific cooperation during the Cold War. Today, addressing the global challenges of the 21st century. 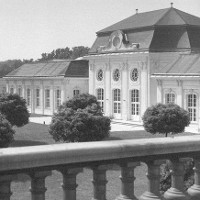 In October 1972, representatives of the Soviet Union, United States, and 10 other countries from the Eastern and Western blocs met in London to sign the charter establishing the International Institute for Applied Systems Analysis (IIASA). It was the culmination of six years’ effort by US President Lyndon Johnson and USSR Premier Alexey Kosygin, and marked the beginning of a remarkable project to use scientific cooperation to build bridges across the Cold War divide and to confront growing global problems on an international scale.

In the 1970s most research organizations focused on national issues. Few encouraged researchers from different countries or disciplines to work together for the greater good. To achieve its ambitious research vision, IIASA would have to break down the barriers between nations and disciplines. This it did, building international interdisciplinary teams that used advanced systems analysis to study innumerable global challenges, both long-standing and emerging. For example, a study on water pollution carried out by a team of IIASA chemists, biologists, and economists in the 1980s is still the basis of modern water policy design in Japan, the USA, and the former USSR.

The refurbished Schloss Laxenburg near Vienna was made available by the Austrian government shortly after the foundation of IIASA in 1972. The Schloss has been the Institute's home for nearly four decades.

When the Cold War ended, IIASA’s sponsoring countries could have said "mission accomplished" and disbanded the Institute. However, as well as helping foster mutual understanding among scientists from East and West, IIASA had shown the scientific benefits of different nationalities and disciplines working together toward common goals. This approach has been widely imitated, for example, in the Intergovernmental Panel on Climate Change and the International Geosphere-Biosphere Programme.

Thus the Institute remained and, in the 1990s broadened its mandate to achieve a greater global focus. Today IIASA brings together a wide range of scientific skills to provide science-based insights into critical policy issues in international and national debates on global change.

IIASA is sponsored by its National Member Organizations (NMOs) in Africa, Asia, Europe, and the Americas. Its research is independent and completely unconstrained by political or national self-interest.

The founding of the Institute

A Brief History of IIASA and Schloss Laxenburg (PDF)