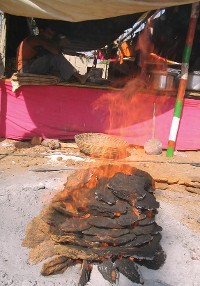 In developing countries across the globe, both rural and urban poor cook their food the way humans have for thousands of years—with heat created by fires fueled by wood, dried dung, charcoal, and other forms of biomass. This heavy dependence on inefficient, polluting biomass fuels does damage both to the people and the environment, creating health risks and a kind of “energy poverty” for the individuals, while at the same time causing local soil and forest degradation and substantial releases of carbon into the atmosphere for the planet.

IIASA scientists conducted studies into the impact of this “energy poverty”—which includes both the lack of modern cooking fuels and little or no access to electricity—in India, Africa, South Asia, and Pacific Asia. They found that the dependence on biomass for cooking by both rural and urban poor is not only inefficient in pure energy terms, but has economic and health consequences that keep living standards low.

The solutions for changing cooking fuel use are the same for all of the regions—subsidies for the purchase of cleaner-combusting LPG (liquefied petroleum gas) fuel, combined with low-cost financing to enable the purchase of cook stoves to use the modern fuel. “Subsidies alone on the fuels themselves don’t do it,” said IIASA environmental and energy economist Shonali Pachauri, a member of the research team. “You have to lower the capital costs. Unless you can give people an easy way to finance the purchase of appliances then you aren’t going to change the fuel use. It can be micro-financing or government-backed financing, but it has to make the appliances affordable.”

The IIASA research was done in two stages, with the first being a study of how subsidies and financing could change cooking fuel use in India. That study found that biomass is the fuel of choice among poor rural and urban dwellers. The researchers found that, as income levels increase, urban dwellers switch first to kerosene and then to LPG.

Using a model developed at IIASA called MESSAGE-Access that looks at patterns of fuel use and economic strategies for changing those patterns, the researchers found that improving financing for the appliances needed to use LPG, combined with a subsidy for the fuel itself, could mean “the whole population might be prompted to switch to LPG.” By doing nothing and letting the current consumption patterns continue, the number of people using traditional biomass would rise over the next decade.

Economic development and the adoption of modern cooking fuels go hand in hand, the study concludes, “and it is hard to imagine improving one without improving the other.”

The methodology applied in India was adapted to look at energy poverty in the African and two Asian regions, then expanded to include the consequences of no access to electricity.

As with the India study, the research on cooking fuel use in Africa and South and Pacific Asia found that, “without additional new policies to improve access [to LPG],” the total population in those regions “dependent on solid fuels for cooking will rise from 2.2 billion [in 2005] to 2.3 billion by 2030. Intervention with policies that include subsidies and financing, however, could make a dramatic difference,” the scientists said.

According to the study, “A subsidy policy that reduces the price of modern fuels by 20 percent below the existing price level in each region would reduce the numbers of people dependent on solid fuels from 2.25 billion?.?.?.?to 1.76 billion.” There are other scenarios that look at different combinations of subsidies and financing schemes, and all of them are more effective than fuel subsidies alone.

The most effective is a scenario that combines a subsidy level of 50 percent of fuel costs with 30 percent micro-financing. Such a policy will leave only about 240 million people, largely in Africa, reliant on solid fuels by 2030, the study says, and would cost about US$435 billion over 20 years.

The data gathered on electricity use show that accelerating the pace of electrification in the least developed countries and regions typically requires decisions about electrical grid expansion that are made by national governments or regional bodies. While decisions are often made at the national government level, the cost of grid expansion is typically left to the private utilities, and the result is expansion based purely on economics.

“Thus utilities often select projects that require the least infrastructure investments relative to the level of demand,” the study says. The result is that more remote rural regions don’t benefit from grid expansion. And when electricity does arrive in an area, there are often connection fees that, like cooking fuel, require subsidies and financing to make the power available to the poorest residents.

Given the high cost and extensive infrastructure that are the hallmark of large-scale electrical systems, Pachauri said the issue involves a different analysis than cooking fuel use. For a host of reasons, from too little capital to bad management, “increasing access to grid electricity in rural sub-Saharan Africa will be difficult,” she said. Population density is low, so demand is low, and it simply isn’t economical to extend the grid.

The analysis showed that “you have to look at off-grid solutions if you want to bring electricity to many of these areas. There could be mini-grids or, in some cases, renewable sources. If you scale down demand enough you could use solar panels.”

While the studies, which are part of IIASA’s Energy Program and the Global Energy Assessment, were limited to India and parts of Africa and Asia, Pachauri said the goal is to eventually expand the energy poverty research even further. “We don’t include Latin America or China,” she said. “We want to look at those countries next.”

The energy poverty research conducted by IIASA scientists is part of a much larger Global Energy Assessment initiative, which has the ambitious goal of redefining the global energy policy agenda and helping decision makers face the daunting challenge of providing energy services for sustainable development throughout the world.

IIASA researchers have partnered with over 200 energy analysts worldwide to provide through the GEA a strong technical and scientific basis for decision making by evaluating the social, economic, development, technological, environmental, and security issues linked to energy.

The assessment, begun in 2007, is looking at everything from policies needed to address climate change mitigation to creating sustainable, affordable, and secure energy services as a foundation for economic growth in developing countries. Global Energy Assessment will be published by Cambridge University Press in 2011.