Poverty alleviation is about people

New research aims to discover more about the people on the receiving end of our current aspirations to expand energy access. 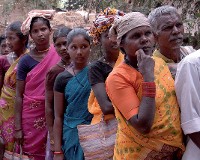 In his foreword to “Energy for a Sustainable Future,” the report of his Advisory Group on Energy and Climate Change (AGECC), UN Secretary-General Ban Ki-moon wrote: “Expanding access to affordable, clean energy is critical for realizing the MDGs and enabling sustainable development across much of the globe.”

This is a noble goal, expressed by many world leaders. But how does one accurately judge whether any progress is being made toward expanding access to energy or, for that matter, enabling sustainable global development? Neither sustainability nor energy poverty can be easily boiled down to one number. Tracing changes in energy poverty levels back to specific past efforts is extremely challenging because general economic growth, social and infrastructural development, and a variety of environmental and human behavioral factors can influence energy access. Equally, data are lacking in crucial areas. What factors drive households to escape from energy poverty? And what are the risks and vulnerabilities they face that cause them to fall back? Such research is very data-intensive and requires panel studies that track the same group of households over long periods of time.

Many studies have tried to draw up indicators so that comparisons can be made of how well projects, programs, and policies aiming for sustainable development have worked—for instance, by using energy indicators to provide an impartial yardstick for poverty assessments or by suggesting a lower limit to energy use of around 2,000 W per capita for a decent standard of living—but no set of indicators suitable for all purposes has ever been up to the task of providing the timely and comprehensive knowledge we need if we are to achieve the MDGs and development goals beyond.

Energy poverty is caused by a complex combination of factors, including lack of physical availability of certain energy types, low income, and the high costs associated with using energy. But knowing not just who is energy poor, but how and why, is essential for designing effective programs and policies too. For this, detailed disaggregated, regularly produced data are needed, able to show shifts in the composition of energy poverty over time so that progress, or lack of it, can be monitored. In many developing countries, the kind of detailed data required for carrying out such in-depth analysis are not available.

An attempt to identify and fill some gaps in our knowledge about energy poverty is ongoing at IIASA. We have developed an energy access–consumption matrix (right) to describe the entire population distribution of a nation in terms of their level of access to different kinds of final energy and the amounts they consume in useful energy terms. We continually refine and update the matrix to cross-reference new data on additional dimensions of poverty, for example, % literate, % living in rural areas, % with access to tap water, average per capita land holding, average per capita expenditure, etc. In the matrix, an approximate threshold can be defined, both in terms of the level of access and quantity consumed, to distinguish the energy poor from the non-poor (such as by the red line in the matrix). The matrix does not measure energy poverty per se, but it does provide a good basis for undertaking a comparison over time and thus assessing how the distribution of the population is shifting both in terms of access and consumption levels. Below is an example of the energy access–consumption matrix applied to assess the situation for the last two decades for India. 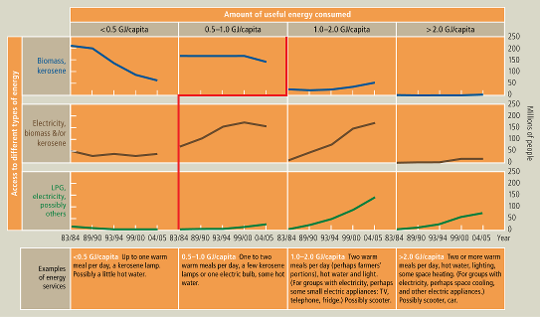 THE ENERGY ACCESS–­CONSUMPTION MATRIX. The matrix describes the entire population distribution of India in terms of their level of access to different kinds of final energy and the amounts they consume in useful energy terms. Source: Adapted from Pachauri & Spreng (2011).

We can glean new knowledge from this matrix. For instance, we see that between 1983–1984 and 2004–2005 in India the number of energy poor has declined but the inequalities in the distribution of population by energy access and consumption have grown. The number of people living in desperately energy poor households having access to only biomass and kerosene and using barely enough fuel to cook a full meal a day (top left cell) has decreased from 38 to 8 percent, while the number living in households having access to electricity and possibly also LPG, and using more than enough fuel to cook two full meals a day (four cells near bottom right of matrix), has increased from 3.5 to 42 percent.

We also found that differences in other dimensions of poverty for populations across distinct access levels are starker than those with varying amounts of consumption. Thus, between biomass and kerosene users in the highest and lowest energy groups there were few differences in terms of literacy and access to tap water. However, households using similar amounts of energy but having access to LPG and electricity also have greater access to tap water and higher literacy. Households using cooking fuels like dung or firewood as their primary source of cooking energy are also more likely to have a lower daily calorie intake on average than those that use more efficient and cleaner-combusting fuels such as kerosene or LPG.

These are just a few of the results obtained. But what we have found remarkable is just how understudied these end users have been in programs designed to improve energy access. For instance, much of the kerosene subsidized by the Indian Government for low-income households leaks to the black market and as rural households use kerosene for lighting rather than cooking, the subsidy is of negligible value in rural areas. A regular system of policy monitoring and regularly collected data for constructing indicators regarding kerosene usage could have helped inform policymakers and may have resulted in the design of a policy that better meets objectives.

Understanding the local context, the living conditions, as well as the physical state of the house in which a family is expected to adopt a new stove or fuel, is also crucial to the success of policies. What if, in cultures where women have no rights, the head of the household may not be inclined to introduce a new measure to ease the woman’s toil?

The conclusions of much of our work point to the need for making monitoring and evaluation an integral part of all projects to generate the evidence needed to convince policymakers and donors of the positive impacts of household energy interventions—right from inception. And information also needs to be collected on the macro environment in which these households and communities operate, as local and national policies also impact the outcome of specific projects and interventions. Sustainability indicators are not worth much if they are simply aggregations and compilations of tons of statistics. Indicators are most useful when picked to measure a specific impact or aspect, often targeted to themes of special interest. Poverty alleviation is about people—people who are in situations very difficult for most of us to imagine.

Perhaps we should also remind ourselves that programs are there to benefit end users and that we do not know those end users intimately enough.