The annual Economist Arctic Summit was held this year in Oslo, Norway. Dropping oil prices, rising tensions with Russia and new production capabilities in the US all affect the investments in the Arctic; the meeting posed the question “whether commercial interest in the Arctic is a bubble about to burst”. 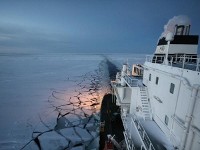 The Norwegian Minister of Foreign Affairs Børge Brende opened the meeting, which then focused on climate change, governance, geopolitics, investments and social and economic development, risk management in the Arctic. The meeting was moderated by James Astill, Political Editor of The Economist.

Special Advisor to the IIASA Director General and Chief Executive Officer, Ambassador Hannu Halinen was invited to the closed Speakers' Dinner on March 11, where he introduced the IIASA Arctic Futures Initiative (AFI) as the AFI Advisory Board co-chair. At the Summit itself, Hannu Halinen took the AFI up in his interventions as well as at the roundtable discussion over the lunch.