The Arctic is a global crossroad between commercial and environmental interests. The region holds substantial natural resources and many actors are investigating ways to utilise these for economic gain. Others view the Arctic as a particularly pristine and vulnerable environment and highlight the need to limit industrial development. 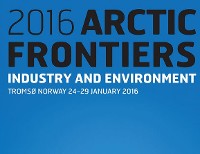 Arctic Frontiers 2016 will discuss the balance between resource utilisation and preservation, and between industrial and environmental interests in the Arctic. The 10th Arctic Frontiers conference held in Fram Centre, the High North Research Centre for Climate and the Environment located in Tromsø, Norway, the city known as the Gateway to the Arctic. The event takes place during the fourth week of January under the theme “Industry end Environment” gathering some 1400 representatives from science, policy, business and civil society from this important region as well as globally.

IIASA Arctic Futures Initiative (AFI) will be presented in the Arctic Economic Council (AEC) breakout session on Tuesday 26 January. AFI will also organize a meeting with the indigenous, tribal and native peoples in connection to the Arctic Frontiers conference.