A IIASA delegation visited the United States to strengthen relationships with leading academics, the US Committee for IIASA, and government officials as well as raise the profile of the Institute’s international systems science and science diplomacy. The Arctic Futures Initiative was discussed and presented in several side events organized in connection to the annual AAAS meeting in Washington DC. 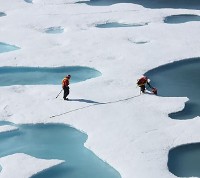 The American Association for the Advancement of Science (AAAS) is an international non-profit organization dedicated to advancing science for the benefit of all people. The AAAS meeting brings together thousands of leading scientists, engineers, educators, policymakers, and journalists from around the world to discuss recent developments in science and technology.

IIASA, the National Academy of Sciences US Committee for IIASA, and the Embassy of Austria co-sponsored a seminar “International Scientific Cooperation for Global Sustainability: 3 Topics” on 11 February. H.E. Dr. Wolfgang Waldner, Ambassador of Austria to the U.S. gave a welcome speech followed by the first topic and panel of the seminar “Achieving the Sustainable Development Goals: Developing Pathways, Assessing Policies, and Measuring Progress”. The last topic was “Global Climate, Ecosystem Services, and Biological Sequestration”.

The AFI panel was the second topic on “Arctic Changes, Arctic Visions: Informing policies for the Arctic future we want” with a distinguished introduction followed by panel members’ presentations and a lively discussion:

Arctic challenges in the context of the U.S. Arctic Chairmanship

Opportunities and challenges in diplomacy in the Arctic

Purpose, Goals and Tools of the Arctic Futures Initiative

During the visit, the IIASA delegation enhanced relationships in connection to the IIASA’s Arctic Futures Initiative (AFI). Meetings with the US Department of State included discussion with Admiral Robert Papp, the State Department’s Special Representative for the Arctic. The AFI was also extensively discussed with Ambassador Mark Brzezinski, Executive Director of US Arctic Executive Steering Committee and Julie Gourley, Senior Arctic Official at the US Department of State. Meetings were held with Rafe Pomerance, NAS Polar Research Board member and former Deputy Assistant Secretary of State for Environment and Development; Kelly K. Falkner, Director of Division on Polar Programs (POLAR) at NSF; John Farrell, Executive Director of US Arctic Research Commission; Brad Ack, Senior Vice President, Oceans, World Wildlife Fund; David S. McCauley, Senior Vice President, Policy and Government Affairs, WWF. US parties expressed their broad support for the IIASA coordinated AFI and their determination to work further with IIASA on developing this holistic initiative for the benefit of the Arctic.

Professor Paula Kankaanpää: Challenges and opportunities in diplomacy in the Arctic (PDF)

Dr. Charles Vörösmarty: Purpose, Goals and Tools of the AFI