The Wilson Center Polar Initiative is an awareness-raising project on Arctic and Antarctic issues focused at American audience. The Polar Initiative convenes and fosters discussion on research and programmatic activity on Arctic and Antarctic issues to investigate the geopolitical, human, and environmental challenges of the Polar Regions. The initiative is a multi-program effort to coordinate activity and encourage investigation of important areas of the world that takes advantage of Wilson Center expertise in a variety of regions and issue areas. 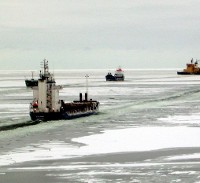 Ambassador Hannu Halinen, as the Special Advisor to Professor Pavel Kabat, Director and CEO of IIASA, was one of the policy level representatives, representing IIASA and the Arctic Futures Initiative (AFI). In his speech, Ambassador Halinen indicated a number of points where the AFI can contribute to the interest of the roundtable, such as the “need for collaborative science”, “inventory of what science has accomplished in the Arctic" and "a strong stakeholder model for risk assessment and management".

Background on Wilson Center The geopolitical changes resulting from the end of the Cold War, ongoing climate change, and the potential for greater economic and resource development have increased the strategic importance of the Polar Regions. Managing the many changes emerging—including, but not limited to, environmental, economic, security, and human security issues—demands bringing together U.S. expertise. Other organizations in Washington D.C. center on the Arctic issues, but no other group focuses on the Antarctic, and none seriously looks at economic, human, and environmental issues.