The Opening Arctic Conference 11-12 March 2016 included two events that took place at the Fletcher School of Law and Diplomacy, Tufts University, MA, USA. The event on 11 March was under so called Chatman House rules with limited participation, the 12 March event was more structured and aimed at public participation. 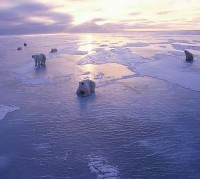 The Opening Arctic Conference builds on the Fletcher School's Warming Arctic International Inquiry series, to bring together high-level thought leaders from across disciplines. The conference is organized annually to address the foreign policy, economic, environmental and security implications of the opening Arctic.

The Fletcher School has established a tradition of examining Arctic affairs in an interdisciplinary manner. The fourth annual conference in 2015 brought together President Ólafur Grímsson of Iceland, Ambassador David Balton, Dr. John Holdren of the White House, and many more to discuss themes surrounding “The Arctic Paradox”. In 2016, Ambassador Mark Brzezinski, Director of the U.S. Arctic Executive Committee and Ambassador David Balton, Chair of the U.S. Arctic Council Chairmanship continued the tradition from the U.S. side.

IIASA AFI was included in the discussions as an international, collaborative, inclusive initiative with a broad focus on science diplomacy, holistic Arctic approach, being the initiative with potential to link the chairmanships.

The Opening Arctic Conference challenges policymakers, business leaders, academics, and students to develop solutions to Arctic challenges. Opportunities continue to emerge in the form of new shipping routes, changing fisheries, increased access to mineral and hydrocarbon wealth, and the pressing need for supporting infrastructure. With increasing opportunities come new questions: How can Arctic nations best regulate economic opportunity and reconcile Arctic territorial rights with competing national interests and external political tensions? Why is Arctic development important to non-Arctic nations? What are the economic and political implications for the global community?

The conference investigated these questions in three panels and a series of breakout sessions. The panels were:

The Opening Arctic Conference also touched on the concept of linkages between successive chairmanships of the Arctic Council, currently held by U.S., passing on the chairmanship to Finland in May 2017.