Representatives from IIASA and the Arctic Futures Initiative took part in events and meetings as part of the annual Arctic Circle Assembly in Reykjavik, Iceland. 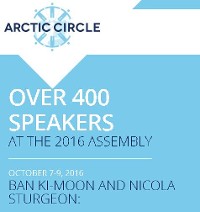 The Arctic Circle Assembly gathers science, policy, and business representatives and is hosted by H.E. Ólafur Ragnar Grímsson, former President of Iceland (1996-2016). The aim of the meeting is to facilitate networking and working meetings across disciplines, issues and organizations, and essentially also discussions hosted by nations and a variety of international and Arctic institutions.

The meeting program in 2016, similar to previous years, was built on plenary sessions until mid-afternoon and a large number of parallel breakout sessions based on an open call for sessions. This year the Assembly gathers over 400 speakers, some 2,000 participants at the Harpa Conference Center and Conference Hall.

The nations and their approach to the Arctic highlighted this year are Scotland and Switzerland. “Scotland and the Arctic” was presented by Nicola Sturgeon, First Minister of Scotland stressing the high-level science in Scotland and discussing the interesting situation due to Brexit.

AFI Core Group members were conveners and presenters in several panel and breakout group sessions, see program at http://www.arcticcircle.org/. In addition, several AFI-related side meetings were organized for planning of collaboration.