The 11th Arctic Frontiers Conference (AFC) convened in Tromsø with the title "White Space - Blue Future". Arctic Frontiers is an international arena on sustainable development in the Arctic. The conference addresses the management of opportunities and challenges to achieve viable economic growth with societal and environmental sustainability. 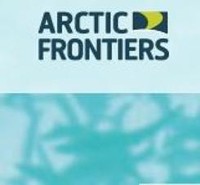 Arctic Frontiers brings academia, government and business together to create a firmer foundation for decision-making and sustainable economic development in the Arctic. Arctic Frontiers conference prepares the new Arctic future.

The event takes place during the fourth week of January under the theme “Industry end Environment” gathering some 1400 representatives from science, policy, business and civil society from this important region as well as globally.

The ocean carries vast resources, many of which are undeveloped and undiscovered. There are still many poorly known places on the Arctic map, and we know more about the surface of moon than the oceans. As the climate gets warmer, new areas of ocean in the Arctic are becoming accessible. This has resulted in an increased attention from scientists, businesses and states. Arctic Frontiers 2017 will discuss the gaps in our knowledge about the Arctic oceans and the role these will play in the future.

What do we know about the processes taking place under the ice and the impact of the polar night on Arctic ecosystems? Changes occur in the Arctic ecosystems, how much of it is natural? As the arctic productivity alters, new species establish, existing species change their geographical extent, creating opportunities for new fishing grounds., How do these processes alter the dynamics of fisheries? With new areas becoming accessible, how do we assess, manage and mitigate risk? How can technology be a driver for arctic business development? With new areas to operate in, how do people connect?