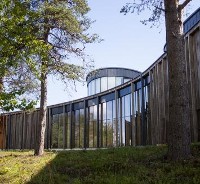 13th Arctic Parliamentary Conference took place in Inari, Finland from 16th to 19th September. The event focused on four themes as the most timely and pressing issues that affect the region: Digitalization of the Arctic, Climate change and its effects to the Arctic, the Corporate Social Responsibility for the companies operating in the Arctic, and the Social Well-Being of the people living in the Arctic.

Prof. Lassi Heininen, chair of AFI Core Group addressed Arctic cooperation, as well as climate change and regional consequences in his presentation to the Standing Committee of the Arctic Parliamentarians.

Our modern societies are in an ambivalent situation, that never before there has been such consciousness of the importance of ‘global ecology’, and that the combination of pollution and climate change is considered as a man-made global security threat and a wicked problem. Further, that urgent human responses are not only largely seen needed, but there are expertise, skills, technology & methods for them. This is much the case in the Arctic which is affected by long-range pollution and rapid climate change, as well as their direct impacts (e.g. melting of sea ice, glaciers and permafrost) and indirect impacts (e.g. related uncertainty, new ethical challenges).

Therefore, there is an urgent need for alternative discourses and a paradigm shift in our approach to traditional (nationally-defined) security and in developing mind set for resilience. This requires on the one hand, political will and more ambitious policy-shaping by policy-makers - one of the questions is if the so-called binary-thinking, ‘both-and’ is better than ‘either-or’. On the other hand, better consciousness by civil societies is needed to (re)define citizens and people(s) as actors of security in addition to a more abstract state as the main actor.

Here recent changes in Arctic security and geopolitics - “to decrease military tension and increase political stability” – are encouraging. The environment has acted as the driver for common interests between the Arctic states, when they have affirmed, and affirm, their commitments to “sustainable development and the protection of the Arctic environment”, as well as to international scientific research and region-building in the Arctic.

When searching for solutions, there are already functioning methods, means and other achievements, a faith in growth and technology, as well as hindrances to accept more strict regulations and cause a paradigm shift in approach of resource governance. Better to search for several solutions, combine global - local perspectives, build resilience and develop new measures how to decrease GHGs & pollution, as well as to create a holistic, integrated and innovative approach to a changing Arctic. An important precondition for this is that the Arctic states ’ criteria, by which to make decisions, supports the maintain the high geopolitical stability and continue to reconstruct their reality of the globalized Arctic transferring the current political stability into peaceful change.

One of the universal challenges is how to go beyond the mainstream and towards “global environmental security”, and convince decision-makers that there is no other possibility but an urgent need to solve the problem by proper ways. Behind is the understanding that ‘environmental protection’ is not any more a marginal field of low politics and that of a society, instead the Environment – as the “material basis for human existence which is put into a danger to be destroyed by human activities” - really matters.