Lassi Heininen, Karen Everett, and Barbora Padrtova provided an update on the AFI project Analysis and Synthesis Report on Arctic Policies & Strategies and Programs to project funders and stakeholders. 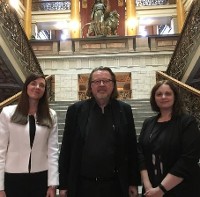 In 2018, the Arctic Futures Initiative (AFI) received funding from the Ministry for Foreign Affairs of Finland and IIASA to undertake a substantive research project that critically examines key strategies and documents of different Arctic stakeholders, including the eight Arctic states, the Arctic Council and its Observers and Permanent Participants. Analysis will identify similarities, differences, and policy gaps to better understand the current Arctic governance environment and offer possible recommendations.

As the project is just over the half way mark, Lassi Heininen, Karen Everett, and Barbora Padrtova gave an update to the Finnish Senior Arctic Official and representatives of several ministries of the Finnish government on their progress and provided some primary findings. Overall, the meeting was a success and the AFI team received valuable feedback. The final report will be launched in autumn 2019.

Ministry for Foreign Affairs of Finland

The Ministry for Foreign Affairs (MFA) advances the security and welfare of Finland and the Finns, and works for a secure and fair world. In addition to several other duties, the MFA is responsible for Finland's Arctic policy.

The Arctic Council's rotating 2-year chairmanship is with Finland until May 2019. The Arctic Chairmanship rotates among the Arctic States: Finland, Iceland, Russia, Norway, Denmark, Sweden, Canada and the USA.

During its Chairmanship, Finland aims to contribute to maintenance of stability and strengthening the Arctic cooperation, in addition to raising national profile in relation to the Arctic.

Links to relevant strategies and policies:

Government policy regarding the priorities in the updated Arctic Strategy 2016