Population Projections of the Arctic by Levels of Education

In this project, for the first time, population projections have been generated for all the territories in the peripheral part of the world next to the North Pole – the Arctic. As the further gradient of novelty, education is introduced into the cohort-component model of population projections. 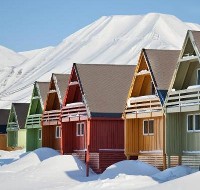 The Arctic is a rapidly changing geographical area surrounding the North Pole. The Arctic region covers more than 10% of the planet’s total land area but is one of the most desolate and least populated areas due to peripherality and unfriendly climate conditions. A relatively small total number of around 10 million people (in 2015) reside in the territorial vastness of dozens of sub-national entities north of eight Arctic countries.

Local people are subject and driver of the widely discussed transformation. A rapid transformation of the Arctic in different extremes and directions started to take place in recent decades. Environmental and socioeconomic drivers interact in a complex way and amplify those changes, making the future difficult to predict. Both global and local mining, oil and gas industries, fisheries, transportation, technology development, and boosting tourism are among those factors most affecting Arctic ecosystems and biodiversity. They come together with climate change that leads to the loss of sea ice, erosion and contamination of coastal lands due to e.g. thawing permafrost and global transport of chemicals.

In this project we addressed several important factors that impact the region’s future were addressed: human populations, migration of people, and education as a proxy of human capital. We examined recent population developments and model future demographic trends forward to 2050.

By combining available data from national statistics and data demographically reconstructed on health, mortality, and mobility we provided an overview of the factors influencing the number of children born to Arctic women, mortality levels and patterns, causes and implications of changes in the sex and ethnic composition, aspects of population ageing, as well as the spatial distribution and patterns of migration across the North.

To account for regional characteristics we incorporated assumptions on the processes of population change explicitly Arctic in nature in addition to global ones. We explored the age and sex parameters of interest, and the level of higher education based on the fertility and mortality of people with a different level of attained education. We presented three alternative future scenarios: “Medium development”, “Arctic Boost”, and “Arctic Dip”. The sub-national and country-wide population projections suggest how education as a factor of human capital may drive demographic shifts in various parts of the Arctic.

Heterogeneity is apparent at all levels of demographics and education in the Arctic region. The Arctic is likely to keep a status quo in the future number of inhabitants, varying between 9.6 (Arctic Dip) and 11.6 (Arctic Boost) million people in 2050, yet representing only a tiny share in their countries’ totals. Inside the region, the population of the North Atlantic and North American Arctic will grow faster than in the territories of the Russian and Fennoscandian Arctic. Population growth is forecasted explicitly by all three scenarios but to a various extent in the North American Arctic and North Atlantic Arctic regions, with the rest of the Arctic provinces expected to shrink or, in case of the optimistic Arctic Boost scenario, to increase very slightly.

In education, gender gap has been found to be already substantial and will increase further towards feminization of human capital, meaning less females than males in the primary educational segment and more females than males in the post-secondary educational segment in the trajectory 2015 to 2050. ‘Indigenousness’ has a strong presumable effect on the future population structure, with both younger, less educated populations showing slower dynamics of human capital development than in the areas with only a minor share of Indigenous people. The main policy message here is to revise current programs and plan the future ones to meet the need for diverse educational opportunities at all levels within and between Arctic territories, in particular for rural, remote, and Indigenous areas.