AFI representative Dr. Anni Reissell attended a closed roundtable meeting on the upcoming AC Finnish Chairmanship (2017-2019) organized by the Finnish Institute of International Affairs and the Arctic Centre of the University of Lapland. 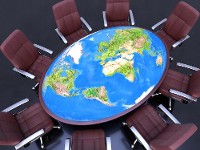 Finland will take over the Arctic Council Chairmanship from United States in April 2017. The Finnish chairmanship program is being prepared through wide range of consultations with stakeholder groups. The program is expected to reflect continuity within the AC chairmanships, paying attention to the Finnish Arctic Strategy, the previous Finnish chairmanship period and its achievements, and the views of the indigenous peoples. The program will be presented at the October 2016 Senior Arctic Officials (SAO) meeting in Portland, Maine.

Economy, environment and use of natural resource, climate and global change, biodiversity, Arctic societies, and connections to global developments (such as the global Sustainable Development Goals) have been highlighted in the Finnish Arctic policy. To highlight the current know-how, Finnish businesses have sent propositions to the Ministry of Foreign Affairs. The AFI and WWF representatives have stressed the importance of scientific approaches and methodology that can study complex and large entities, of utmost importance to obtain a holistic view of the Arctic and its development also on relation to global developments.

The Arctic Council is a high-level intergovernmental forum that addresses primarily environmental protection and sustainable development issues in the Arctic region. The Arctic Council commissions assessments carried out mainly by the six permanent Working Groups in collaboration with task forces and expert groups.

In September 1989, on the initiative of the government of Finland, officials from the eight Arctic countries met in Rovaniemi, Finland to discuss cooperative measures to protect the Arctic environment. They agreed to work towards a meeting of circumpolar Ministers responsible for Arctic environmental issues.

The Chairmanship of the Arctic Council is rotated for a 2-year period. The United States chairmanship is 2015-2017, Finland 2017-2019. Canada was the first chair state (1996–1998), followed in the order by United States, Finland, Iceland, Russia, Norway, Denmark, and Sweden. All decisions of the Arctic Council and its subsidiary bodies are by consensus of the eight Arctic Member States.