European Commission and EU External Action together with the Finnish Ministry of Foreign Affairs co-hosted a high-level joint event in Oulu, Finland, on June 15-16, 2017  on integrated European Union policy for the Arctic "A Sustainable Arctic - Innovative Approaches". 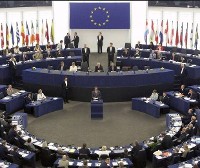 The meeting was attended by Prime Minister Juha Sipilä and Minister for Foreign Affairs Timo Soini, from Finland, High Representative of the Union for Foreign Affairs and Security Policy/Vice-President of the EC Federica Mogherini, and EU Commissioner for Environment, Maritime Affairs and Fisheries Karmenu Vella, Foreign Minister of Foreign Affairs Chrystia Freeland from Canada, Foreign Minister Péter Szijjártó from Hungary, as well as Ministers, Deputy Ministers, Ambassadors and High Officials from EU countries and regions (incl. Greenland and Faroe Islands). The Indigenous Peoples were represented by Saami Council, RAIPON from Russia, and ICC from Canada and Greenland.

In the first panel session “The Arctic is Local and Global – Increasing Expectations” on 15 June, Timo Soini, Federica Mogherini, Karmenu Vella, Chrystia Freeland and Péter Szijjártó had an open debate with representatives from governments, industry, research, indigenous and local community representatives on the challenges and opportunities facing the Arctic and on how international and local cooperation can boost sustainable and innovative development. Arctic Futures Initiative Core Group member, President and CEO of Arctia Ltd and Chair of Arctic Economic Council Tero Vauraste was panelist in the panel session on “The Arctic – a Northern Light for Innovation”. On 16 June, the event included a high-level session of the Arctic Stakeholder Forum with panel sessions “Common Investment Needs for a Sustainable Arctic” with Arctic Futures Initiative Core Group member, Director of WWF Arctic Programme Alexander Shestakov as a panelist, and “Innovative Solutions for Sustainable Regional Development in the Arctic” and the annual Indigenous Peoples Arctic Dialogue. Arctic Futures Initiative Core Group member, Special Advisor to the IIASA DG and CEO Ambassador Hannu Halinen attended the events and gave a short intervention on AFI.

Indigenous Peoples had a prominent role in the whole meeting. The EU wanted clearly to show that their participation is supported and their voices heard. Overall, the meeting was a strong and clear signal of the EU commitment to build its Arctic policy through dialogue with key stakeholders. The EU activities on the Arctic include the series of Ocean Conferences (initiated with 2014 meeting in Washington DC) that will be organized by EU in the future, and the next meeting of Arctic Science Ministers will be held in Berlin in September 2018. It was announced further that this Oulu meeting will be followed by an annual event by the EU.

Ambassador Halinen made the following intervention in the discussion:

"At this Stakeholder Forum the question of reaching out and interact between stakeholders is of crucial importance. A few years ago the Finnish Prime Minister's Office organised a seminar to look at how the political decision makers could benefit from Arctic research more efficiently. The IIASA Institute with its long experience in creating policy-support instruments, took up the follow up from the Helsinki seminar by starting to develop the Arctic Futures Initiative project.

The reasoning behind the AFI lies in the need for synthesis and a holistic approach that will contribute to informed decision-making in order to understand the plausible futures of the Arctic. So our mission is to provide guidance to decision makers worldwide by facilitating solutions to global and universal problems through applied systems analysis. The envisaged outcome is an Arctic Integrated Systems Assessment for a sustainable Arctic.

What does this mean in the EU context? Let me give you an example: the Arctic Centre of University of Lapland has been requested by the EU to study the EU Arctic reports and recommendations with a view of follow up and implementation. The AFI can provide a contribution, a concrete tool to help in this work.

Finally, the AFI will be presented at the next Arctic Circle conference in Reykjavik in October 2017. You are welcome to participate in discussions there!"