IIASA-AFI is partner in a new project consortium for developing a regional think tank in the Northern Dimension area. The aim is to enhance evidence-based policy-making as well as improve policy relevance of research conducted in the region. 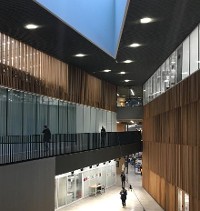 The NDI Think Tank Action - Development of think tank functions of the Northern Dimension Institute – was launched in a kick-off meeting that took place on 27 February at the new premises of the School of Business at the Aalto University, located in Espoo, Finland. From IIASA, Lassi Heininen and Anni Reissell attended the event.

The Aalto University coordinates this project, with Riitta Kosonen from Aalto University and its Business School acting as Head of Action, working in partnership with IIASA-AFI, University of Oulu, Saint Petersburg State University of Economics (UNECON), and Northern (Arctic) Federal University named after M.V. Lomonosov (NArFU). The action is co-financed by the European Commission DG NEAR.

ND area countries are confronted with common future challenges and opportunities across the state borders especially in relation to the environment, climate change, healthy ageing, transport and logistics, emerging trade routes in the Arctic and role of culture in solving societal challenges. The NDI Think Tank Action provides research-based knowledge and a neutral platform for open dialogue, people-to-people-contacts between decision-makers, business, NGOs and the academic community in order to create common approaches for finding solutions to future challenges.

The Action contributes to capacity building of the participating civil society actors, in particular the academic community, by conducting effective interaction and outreach training activities, hence strengthening their voice in the ND area. By connecting decision makers and other stakeholders within the ND and Barents collaboration structures (as the end-users of the provided scientific evidence) at various levels into dialogue with the academic community, both the policy relevance of research conducted within the NDI is improved and evidence-based policy-making is supported.

The Northern Dimension Institute (NDI) is the academic partner in the ND structure established in 2009. NDI is a neutral university network open to all interested higher-level educational institutions and research institutes. Currently, the NDI network comprises 33 members.

The Northern Dimension (ND) is a joint policy of four equal partners: the European Union (EU), Russian Federation, Norway and Iceland. The ND operates through four partnerships: Environmental, Public Health and Social Well-being, Transport and Logistics, and Culture. The Northern Dimension covers a wide range of sectors, such as the environment, nuclear safety, health, energy, transport, logistics, promotion of trade and investment, research, education and culture.