COURAGE is an interdisciplinary performance, combining dance, theatre, and science. In a time of uncertainty, it aims to address issues, and raise crucial questions: how can we tackle the pressing problems of our time? Is there a way out? COURAGE premiered as part of the Political Symposium at the European Forum Alpbach in August 2016. The summary of this session is available on the IIASA YouTube channel. 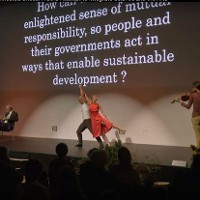 COURAGE at the European Forum Alpbach in August 2016

Both artists and scientists are driven by curiosity, constantly searching for truth, and ways to move society forward. Bridging art and science is the aim of COURAGE, an interdisciplinary dance-theater-science performance, involving artists, scientists, and two members of the Alpbach-Laxenburg Group at the European Forum Alpbach. The theme is “COURAGE in times of multiple interconnected crises”. How can we act together and jointly tackle the pressing problems of our time: terrorism, inequality, climate change, the crisis of trust in democratic values?

COURAGE premiered as part of the Political Symposium at the European Forum Albach on 30 August 2016.