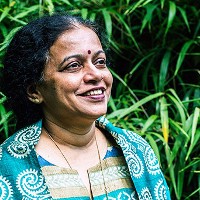 Dr. Leena Srivastava was awarded this special  recognition, by Director General and CEO Albert van Jaarsveld. During the ceremony which took place at the institute, Deputy Director General and CEO, Nebojsa Nakicenovic who has worked with Srivastava throughout her career, gave a laudatio, on the highlights of his time spent working with Leena and on her special contribution to improving the design of policies concerning energy consumption, particularly in her home country of India. In receiving the award Dr. Srivastava thanked IIASA researchers and staff, especially those who had collaborated with her on various research projects during her career to date.

Dr. Leena Srivastava is the Vice Chancellor of the TERI School of Advanced Studies, New Delhi – an inter-disciplinary higher education institution focused on sustainable development. Her research in the last three decades has been in the areas of energy, environment and climate change policies primarily at the Energy and Resources Institute (TERI) where she was previously working as Executive Director. She holds a Masters in Economics from the University of Hyderbad and a Ph.D in Energy Economics from the Indian Institute of Science in Bangalore, India. 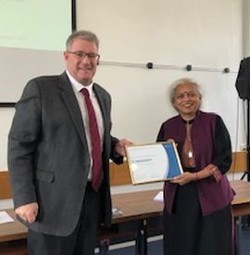 Dr. Srivastava has greatly contributed to improving the design of policies concerning energy consumption and efficiency in India. Furthermore, she has championed and endeavored to encourage increased cooperation regarding energy between countries in South Asia, such as Butan, Nepal, Bangladesh and India. She acted as the coordinator of ‘Working Group III’, the main author of the Third Assessment Report of the Intergovernmental Panel on Climate Change (IPCC) and of the chapter on Sustainable Development in the IPCC’s the Fourth Assessment Report and was also a member of the Expert Committee devoted to framing India’s energy policies, and of the National Security Consulting Body of the Government of India. She holds numerous positions including Co-Chair, Science Advisory Group, UN Secretary Generals 2019 Climate Action Summit and Co-Chair of Future Earth. She is on the Editorial Board of Environmental Innovation and Societal Transitions and has a number of publications and award to her credit. In 2008, the Prime Minister of the Republic of France awarded Dr. Srivastava with the Knight of the Order of Academic Palms (Chevalier Dans l’Ordre des Palmes Academiques) and she has also been awarded the ‘Certificate of Recognition’ by the First Minister of India for her contribution to the work of the IPCC.

The IIASA Distinguished Visiting Fellows Award was established by the IIASA Governing Council in 2013 to recognize the contribution of distinguished scholars to IIASA research. It is awarded to eminent scholars for three years, and Council makes the awards based on the individual’s affinity to system analytic and integrated approaches in science, science-to-policy, policy making or business and for their contribution to IIASA analyses through interaction with its researchers and enrichment of IIASA efforts to address complex problems related to global change. The recipients of the award are encouraged to interact even more with IIASA and when possible visit the Institute to collaborate with our researchers.