The goal of the NDI Think Tank Action is to enhance regional cooperation in the Northern Dimension area through science diplomacy, capacity building and people-to-people contacts. This Action supports EU’s Northern Dimension framework that aims at promoting dialogue and cooperation between the EU, Russia, Norway and Iceland and supporting the EU Arctic policy. 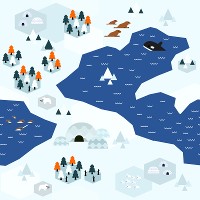 In the times of ongoing political tensions between the EU and Russia, the Northern Dimension (ND) is one of few instruments to continue practical cooperation and dialogue across a broad range of topics, including environment, nuclear safety, health, energy, transport, logistics, promotion of trade and investment, research, education, and culture. The ND is a joint initiative of the EU, Russia, Norway and Iceland, which was started in 1999 and renewed in 2006. The USA and Canada hold observer status in the ND.

IIASA contributes to the NDI Think Tank Action by conducting a foresight study on shipping in the Arctic. Several plausible future scenarios of how commercial shipping can develop in the Arctic until 2050 are co-constructed, and their drivers and implications across economic, environmental, governance, and technological dimensions are detailed.

This foresight study builds on a series of co-creation workshops involving representatives of policy, business, and academic communities from different countries of the ND. The scenarios provide an input for the development of short-, medium-, and long-term policy measures aimed at the search of common interests and the goal of a cooperation together with stakeholders and experts.

The “Emerging trade routes between Europe and Asia” project aims to bring into a dialogue representatives of academia, policy community, business, and civil society in order to look into plausible long-term futures of shipping in the Arctic. Methodologically, it resorts to a foresight approach of downscaling global scenarios to the regional context.

Over the last several decades, foresight has become a widely used strategic planning tool that takes its advantage from broad participation and the contribution of stakeholders with diverse views and in-depth knowledge of various aspects of a complex process or issue. The ultimate objective of a foresight exercise is to co-create several, often radically different, alternative scenarios each describing a plausible future. The deliberation process leading to the formulation of the scenario set allows the participants to learn from each other and see the issue in question from a different perspective, which is why foresight can be seen as a science diplomacy tool.

The aim of this project is to co-create several plausible scenarios of how commercial shipping can develop in the Arctic in the next 50-70 years given the uncertainty in the global demands, other major transportation routes, climate change and technological development. A suitable global scenario framework that will delineate boundary conditions for the Arctic scenarios will be a starting point. Using the existing literature and voluntarily contributions of research partners as input, three workshops will be run to substantiate three key scenario dimensions: environment, technology, and trade.

Notably, in this exercise, qualitative scenario development will be enriched by the results from quantitative models.