Stefan Thurner was awarded Scientist of the Year 2017 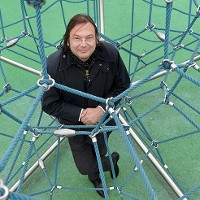 Since 1994, The Club of Education and Science Journalists have been awarding scientists who, above all, make outstanding efforts to present their research to the general audience, in this way promoting Austrian science.

Stefan Thurner is a Senior Research Scholar at IIASA, the Head of the Section for Science of Complex Systems (Vienna Medical University) and the founding President of the Complexity Science Hub Vienna (CSH), where IIASA is a founding member. Thurner works on complex systems, most notably in medical, financial and social fields. Each complex system have networks in it and "understanding these networks is an essence to understand complex systems, how they behave dynamically, react on a stress, show robustness or collapse". Only when it is known how the building blocks are related to each other, it is possible to understand the system, says Thurner. Big Data is also one of the foundations of complexity research, "we do not want to use it to monitor people or to violate privacy". Rather, the data should be used "to solve problems which are posed in the twenty first century in a constructive and scientific way - so then we do not have to rely only on our common sense when managing complex systems" said Thurner.

The text was translated and adapted from Futurezone.