A model assessing how land management affects the environment 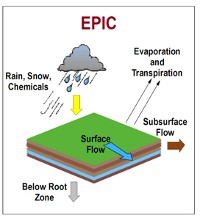 At IIASA, EPIC is used to assess the main global agricultural systems in response to management interventions such as cropping practices or fertilization and irrigation options, and changing environment, including climate change and soil degradation. Besides which EPIC is used to compare cropland management systems and their effects on environmental indicators like water availability, nitrogen and phosphorous levels in soil, and greenhouse gas emissions.

EPIC can analyze several crop types and their management under different weather, topographical, and soil conditions. It investigates the trade-offs between plant growth and yield on the one hand, and environmental impacts and sustainability on the other.

For example, EPIC can estimate—based on soil type and prevailing climatic conditions—the extent to which nutrients from fertilizer, such as Nitrogen (N) are leaching into nearby river and stream networks. This problem is of growing concern as globally, two-fifths of N used in agriculture is lost to ecosystems, with harmful environmental effects.

EPIC, as used at IIASA, models a wide range of biophysical processes in the soil-plant-atmosphere system to consider alternative land uses where land is becoming degraded or is putting natural ecosystems at risk.

It includes a full water cycle, allowing quantifying water availability for plant growth, surface water runoff and percolation downwards to the groundwater system. It can simulate different weather patterns and events, such as the effects on crop production of heavy rainfall or prolonged drought, and it can estimate plant growth and yield based on the temperature or moisture content of the soil. The effects on crop productivity of natural processes, such as erosion and sedimentation, and of human activities, such as soil tillage, can also be fully demonstrated. The impacts of land use on carbon cycling, GHG emissions and soil functioning are among the main modeling focus.

Large-scale EPIC applications are based on the EPIC-IIASA Global Gridded Crop Modelling (GGCM) framework, integrating the site-scale EPIC model with globally available datasets on climate, soils, land cover and land use. A more detailed version of gridded EPIC is available for Europe (EU-EPIC).

At IIASA, EPIC is part of the toolkit used to assess the economic and environmental effects on agricultural and forest lands of enhancing carbon sinks and GHG abatement measures. For example, the model has been recently used to quantify impacts and uncertainty of +2°C of global warming and soil degradation on European crop calorie supply, or to highlight the importance of soil data in global crop yield simulations.

About the EPIC model

The EPIC model was developed by the United States Department of Agriculture to assess the status of U.S. soil and water resources and has been continuously expanded and refined to better analyze the exchange of GHG fluxes between terrestrial ecosystems and the atmosphere. It is used around the world by research groups, like IIASA, who calibrate EPIC to meet their own needs.

EPIC-IIASA and EU-EPIC large-scale gridded crop modelling frameworks are being developed by IIASA.

EPIC-IIASA is integrated into the GLOBIOM model, quantifying agricultural production as well as environmental externalities for a range of crop management systems at global scale.

We continue working on linking EPIC-IIASA with the BeWhere model, aiming to supply the model with information on availability of agricultural feedstock for bioenergy production.

The future focus of the model at IIASA will be analysis of GHG emissions and carbon sequestration in the agricultural sector. EPIC already includes tools to analyze organic carbon and nitrogen in the soil, and a methane analysis module is under preparation. Links to IIASA's GAINS model are being strengthened.