FloodCitiSense: Early Warning Service for Urban Pluvial Floods for and by Citizens and City Authorities

How can citizens and city authorities work together using crowdsourcing and mobile technology to create a reliable pluvial flood early warning system? 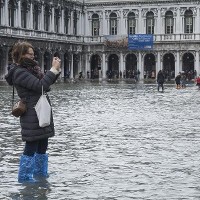 The FloodCitiSense project aims at developing an urban pluvial flood early warning service not only for, but also by citizens and city authorities. It builds upon state of the art knowledge, methodologies and smart technologies provided by research units and private companies to create an innovative public service that reduces the vulnerability of urban areas and citizens to pluvial floods.

About 500 million people live in cities in Europe, most of which are critically vulnerable to extreme weather events, as demonstrated by recent pluvial and fluvial flooding in Northern and Central Europe, which have caused massive damages and losses worth billions of euros. Pluvial floods occur when heavy rainfall exceeds the capacity of a city’s drainage system. Due to their fast onset and localized nature, such floods cause significant damage to urban environments and are difficult to manage.

Reliable urban flood forecasting and early warning services play a crucial role in reducing such impacts. The monitoring and management of city flooding events are often in the hands of local government agencies, however, with citizens playing a passive role. This project proposes an interactive and cooperative framework consisting of citizens, local authorities, research units, and industrial partners working together to improve the monitoring and management of pluvial urban flooding. Citizens are no longer considered passive, potential victims of flooding, but engaged and active contributors in the process of flood monitoring and mapping. The involvement of citizens will enable better simulation and forecasting of flood events, while enhancing awareness and, ultimately, resilience.

FloodCitiSense will integrate crowdsourced hydrological data, collaboratively monitored by local stakeholders, including citizens, and make use of low-cost sensors and web based technologies to create a flood early warning system. This service aims at increasing the preparedness of citizens and cities for pluvial flooding, thereby supporting a significant reduction in flood-related damages and costs.

With the continuous rise of urbanization and intensified rainfall due to climate change, such a service is sure to become more important in future years.

The main outcome of this project will be an urban pluvial flood early warning service for and by citizens and city authorities. This will be accomplished by bringing together all actors in an urban living lab. IIASA researcher, Linda See, is leading the project work package dedicated to the co-creation and development of this early warning tool. Overall project objectives include:

Kickoff Meeting for the FloodCitiSense Project