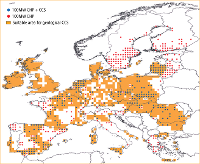 To do this, G4M estimates the amount of net income currently being derived from forests by calculating the amount and value of wood produced  minus the harvesting costs (i.e., logging and timber extraction). It also assesses the potential income represented by carbon storage in forests (sequestration). Taking these values into account, G4M demonstrates whether it would be more profitable to grow agricultural crops or bio-fuels at the location, or whether forestry is the best option for the land.

G4M thus provides an economically sound basis for decision making, either independently, or in conjunction with other models.

G4M is a versatile model that can be integrated with other models to gain greater clarification of land use potential. For instance, above, forest biomass in European forests under sustainable forest management is first modeled using G4M (orange shading), then with IIASA's BEWHERE model to discover the optimal size and location of bio-energy plants in Europe (shown by small squares in the image above).

To model forest growth, the G4M takes a static net primary production (NPP) map and changes it to a dynamic NPP model to show how growth rates are affected by changes in temperature, precipitation, radiation, or CO2 concentrations. G4M also uses information from other models or databases to produce forecasts of land-use change, carbon sequestration and/or emissions in forests, the impacts of carbon incentives (e.g., avoided deforestation), and supply of biomass for bio-energy and timber. The model can incorporate many factors or needs, for instance, the need to provide food security, to understand future urbanization patterns, and to gauge how wildfires or insects  might affect forest productivity.

G4M provides valuable information to policymakers at the national, regional, and international levels.

Future deforestation projections using IIASA models G4M, GLOBIOM, and EPIC are helping Central African nations prepare for negotiating at the climate talks on how to reward rainforest nations for protecting their forests by reducing emissions from deforestation and forest degradation (REDD).

In the Toyota Asian Ozone project, G4M provided estimates of mitigation potentials in the land use and land use change sector to show how the energy needs for economic growth could be delivered while addressing environmental issues issues such as ozone pollution.

About the G4M model

G4M was developed at IIASA in the mid-2000s for modeling afforestation in Latin America under the name of DIMA. From there, it evolved to global forestry scenario analysis, and is now used as a basis for decision making in forest management. As well as demonstrating the pros and cons of different land uses, it can compute optimal forest rotation times to optimize biomass stocking and harvesting rates and can also help to rationalize other important aspects of forest management.

G4M provides information at a resolution that roughly corresponds to a 50 x 50 km grid. Better resolution (30 x 30 km) is planned to improve the ability to analyze  deforestation pressures at the forest frontier.

As a core model of IIASA's integrated modeling cluster for environmental services management, G4M is constantly updated and verified. Most recently, forest growth for the regions of Germany and Austria was successfully estimated and validated against field observations, and new data on a number of tree species were added for modeling on a global scale. Currently, a new version of G4M is being used to determine optimal CO2 prices for reducing deforestation and increasing afforestation. A prototype for a universal forest harvest cost model was also recently introduced into G4M and a linkage was developed to the main European forest stand-level models to provide yield estimates.