National stakeholders from Brazil, government representatives from Indonesia, as well as representatives of the broader international restoration community met in Brazil for the RESTORE+ Mid-term meeting.

Halfway into the project, the RESTORE+ project consortium invited national stakeholders from Brazil and Indonesia, as well as representatives of the international restoration community to participate in the project’s mid-term meeting in Foz do Iguaçu. The meeting was organized by INPE together with IIASA.

During the three-day meeting, RESTORE+ consortium partners presented country specific project approaches and preliminary results. In addition to present and discuss the project’s progress of the last few months, the project consortium also engaged in open discussions with participants from Brazil and Indonesia. Not only to inform but also aiming at consulting these stakeholders about project relevance and potential contribution to evidence-based policy making processes and discuss potential contribution to regional and global restoration initiatives. 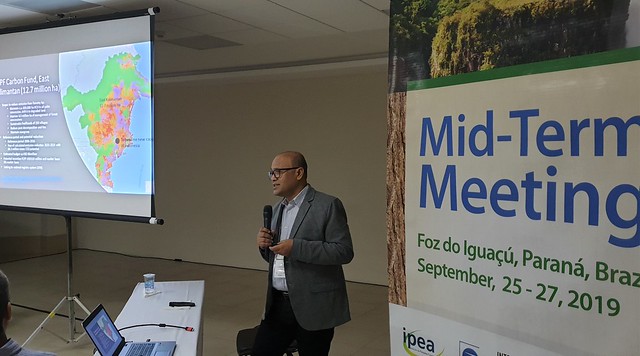 Restoration of degraded land is a significant contributor to the global effort of enhancing land use sustainability. The approach emphasizes comprehensive addressing of multiple ecosystem services as well as socio-economic concerns. The significance of restoration is highlighted by various of international initiatives. The "Bonn Challenge", aiming at restoring 150 million hectares of the world's deforested and degraded lands by 2020 and 350 million hectares by 2030, also contributed to the  Convention on Biological Diversity (CBD) Aichi Target 15, the Rio+20 land degradation neutral goal and the UNFCCC REDD+ goal. In March 2019, the UN General Assembly declared the UN Decade on Ecosystem Restoration aiming at massively scaling up the restoration of degraded and destroyed ecosystems as a proven measure to fight the climate crisis and enhance food security, water supply and biodiversity.

RESTORE+ is a five-year partnership that aims at enhancing land use planning capacity related to restoration or utilization of degraded land in Indonesia and Brazil. In Indonesia, the project aims at identifying specific areas with scenarios for restoration by combining participatory mapping campaigns with land-use and supply chain modelling. In Brazil, established land monitoring and modelling capabilities will be enhanced to support Brazil’s contribution to meeting the “Bonn Challenge”. The project will identify degraded areas, assess restoration options and explore trade-offs associated with the Brazilian Forest Code.

The project is implemented by a consortium of 10 institutions led by IIASA's CLR group with country specific activities coordinated by the National Institute for Space Research (INPE) in Brazil and World Agroforestry Centre (ICRAF) in Indonesia. The RESTORE+ project is part of the International Climate Initiative (IKI) supported by the German Federal Ministry for the Environment, Nature Conservation, and Nuclear Safety (BMU).

A keynote by Thelma Krug, Vice-Chair of the International Panel on Climate Change (IPCC) opened the meeting. She highlighted the strong relevance of the project in light of the two recent IPCC Special Reports on Global warming of 1.5°C and on Climate Change and Land which draw attention to reversing desertification, land restoration including peatland, and soil restoration as well as carbon dioxide removal via reforestation, afforestation and Bio-energy with carbon capture and storage (BECCS) as key elements of climate change mitigation pathways.

To spot a light on the national context and policies for enhancing land use sustainability in Brazil, Gustavo Luedemann (Institute for Applied Economic Research, IPEA) introduced to the Status quo of Brazil’s NDC targets. For the country, agriculture and the potential to invert its carbon footprint plays a decisive role as RESTORE+ advisory board member Eduardo Assad (Brazilian Agricultural Research Corporation, Embrapa) elaborated. Here, current measures like the Plano ABC (Plan for low carbon emission agriculture) presented by José Eustáquo (Brazilian Ministry of Agriculture, Livestock and Food Supply (MAPA)) and the Forest Code and their effective implementation are central.

Medrilzam, Director for the Environment of the Indonesian Ministry of National Development Planning (Bappenas) gave an overview of current restoration and national development policies in Indonesia. He presented the Bappenas led Low Carbon Development Indonesia (LCDI) initiatives and forest and landscape restoration policies supporting the LCDI, which is part of the currently formulated National Medium-Term Development Plan (RPJMN) 2020-2024. RESTORE+ contributed to the land use sector part of this Bappenas initiative by ensuring feasibility of low carbon pathways both from biophysical productivity and land use economy perspective.