Many companies pledged to source deforestation-free palm oil only. What does that mean on the ground? A new IIASA study in collaboration with Ferrero sheds light on land use in palm estates in Malaysia. 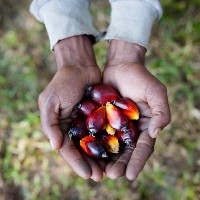 Ripe palm fruits from a plantation in Malaysia. © United Plantations

Companies which produce, trade, retail or confect 90% of internationally traded palm oil have pledged zero-deforestation commitments, meaning that the oil used by them has not been sourced from recently deforested areas. IIASA research in collaboration with the confectionary company Ferrero published in the latest issue of the European Tropical Forestry Research Network (ETFRN News) showcases land use change over 25 years inside oil palm plantations located in Malaysia, where Ferrero sources 80% of its palm oil used in renowned products like the chocolate spread Nutella.

Ferrero sources around 180,000 tons of palm oil per year – this is a substantial amount, similar to the volume of palm oil imported to Denmark – most of which is produced on around 300 estates in Malaysia. These estates are mostly covered by oil palms with a varying amount of forest cover left. Ferrero self-set zero-deforestation commitment and the certification of its production require to keep this forest standing. It is against this backdrop that IIASA researchers Johannes Pirker and Aline Mosnier in collaboration with Ferrero researched the impact on the ground of the company’s zero-deforestation commitment. Doing so, they used open source and publicly available datasets to showcase that committed companies can verify the impact of their procurement policy on the ground with little effort.

“The analysis shows that forest cover is stable inside the estates where Ferrero sources oil” says IIASA researcher Johannes Pirker “and future research at the plantation level should focus on the role of other assets of the landscape such as high conservation and peat areas as well as the question of leakage of unsustainable production to companies and markets which show less commitment to sustainable sourcing”. This latter question – will companies’ zero-deforestation commitments simply displace unsustainable production to less responsible buyers and markets? – has been addressed in a recent publication of the same IIASA research team in collaboration with the Center for International Forestry Research (CIFOR).

Palm oil production is set to rise in the future and additional production will come from both improving yields and finding new land where the impact of conversion to palm plantations should leave a minimal environmental footprint. Identifying and unlocking the potential of this so called degraded or marginal land is in the focus of the recently started RESTORE+ project coordinated by IIASA.

This publication is part of the silver anniversary edition of ETFRN News: Zero deforestation: A commitment to change.

Land use foresight modeling for Indonesia, Brazil and the Congo Basin