During the last century or so, over half of the CO2 emissions from fossil fuel burning, industry, and deforestation have been absorbed by natural sinks such as the forests and oceans. These natural sinks play a critical role in determining the climate effects of CO2 emissions. 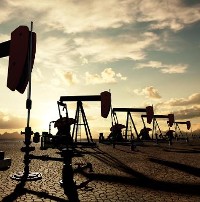 A study published in Environmental Research Letters shows how natural carbon sinks will weaken in response to efforts to remove CO2 from the atmosphere. Understanding this effect is vital to devise pathways consistent with the UN's ambitious 1.5 °C and 2 °C climate targets.

"We expect natural ecosystems to continue to absorb CO2 but as society reduces emissions, or removes CO2 from the atmosphere, this ecosystem service will itself weaken," explained Chris Jones of the UK Met Office, who led the study.

“We have an insufficient understanding of the Earth system’s time delay in taking up and releasing carbon. This is important because it affects how much carbon will be in the atmosphere,” adds IIASA researcher Matthias Jonas, a study coauthor.

The paper looks at results from several numerical climate models. For an emissions scenario that aims to limit warming to no more than 2 °C, it finds that projected land and ocean carbon sinks weaken to less than half their present-day values over the latter half of the 21st century. On longer timescales they weaken to virtually zero by 2300.

The model analysis reveals that in the 2 °C scenario, as fossil fuel emissions decline in the future and as human activity to remove carbon dioxide from the atmosphere begins, atmospheric CO2 slows its growth and begins to decrease. However, the effectiveness of the removal is offset to some extent by a weakening of the natural carbon sinks caused by the reduced levels of CO2 in the atmosphere.

At the UNFCCC's Conference of the Parties in Paris in 2015, the parties adopted the Paris Agreement, consolidating efforts to keep the global temperature increase well below 2 °C above pre-industrial levels and pursue efforts to keep below 1.5 °C. In October 2016 enough countries ratified the agreement for it to come into force.

However, research suggests that society may not be able to reduce fossil fuel emissions sufficiently fast to achieve these targets. Almost all emission scenarios consistent with these temperature goals therefore require intentionally removing carbon dioxide from the atmosphere. This activity is known as carbon dioxide removal or negative emissions technologies. 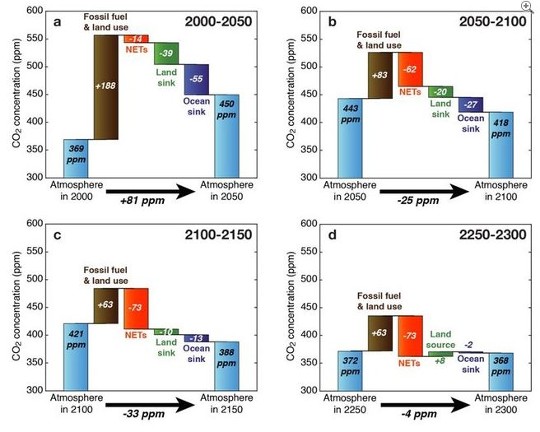 This increased recognition of the requirement for negative emissions led the Global Carbon Project to try to assess the costs, limits and implications of negative emissions. In a scene-setting paper, led by IIASA researcher Sabine Fuss, the researchers explain how the world is "betting on negative emissions.” In other words, scenarios which appear successful in avoiding 2 °C rely on large-scale deployment of as-yet unproven technology

In 2013, a conference sponsored by the International Institute for Applied Systems Analysis (IIASA) in Vienna and the Global Carbon Project assembled scientists from around the world to bring their expertise to address the many questions around the feasibility, efficacy and consequences of negative emissions technology. It identified three key knowledge gaps on carbon dioxide removal: First, how do the natural carbon sinks respond; second, are there economic and biophysical limits; and third, what governance and institutions are required to ensure sufficient deployment. This new study responds to the first knowledge gap, and quantifies how the land and ocean carbon sinks respond to carbon dioxide removal in ambitious future scenarios. Uncertainty around their response is one of the most important issues to address in attempting to quantify the world's need for negative emissions.

IIASA researcher Joeri Rogelj also worked on the study. He says, “Policymakers should not be paralyzed by these added uncertainties of how the Earth system responds to the large-scale removal of carbon dioxide from the atmosphere. On the contrary, it highlights once again the importance of stringent emissions reductions over the coming decades as a precautionary measure to reduce our future reliance on uncertain negative emissions.”