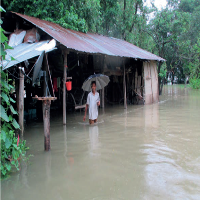 The session ''Building flood resilience in times of climate crisis” brought together research, private sector and practitioner perspectives and expertise on climate change and climate action. It featured discussions and presentations on how integrating climate change through the disaster risk management cycle, engaging communities in building climate resilience as well as taking incremental and transformational interventions can generate lasting change for thousands of households around the world.

Reinhard Mechler showed that in a rapidly warming and changing world business-as-usual approaches to climate change adaptation and risk management will soon not be enough to prevent disasters; increasingly transformational approaches are needed as well. Yet, evidence what transformational adaptation may mean concretely at relevant scales of intervention has been largely missing. He presented ongoing work on understanding and informing transformational responses to climate change as undertaken by the Flood Resilience Alliance, where IIASA co-leads the research work. Efforts include considering transformation in urban planning for dealing with coastal flooding in Vietnam and citizen-science flash flood monitoring in peri-urban communities in Peru. A co-edited book forthcoming in 2021 will provide much needed evidence and insight.