IIASA together with the JRC is inviting to the launch event of a new flagship  report on migration, population and education scenarios for the EU. 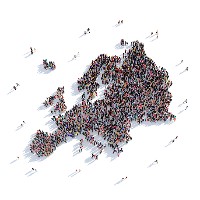 Demographic changes are long-term, and they occur at a steady and predictable pace. Thus, building demographic scenarios may help evidence-based planning for the future. The Centre of Expertise on Population and Migration (CEPAM) Project, a collaboration between JRC and IIASA have produced a new report that makes projections for 2060 to understand the long-term impact for the EU of trends in fertility, mortality, migration, and changes in education levels and labour market participation. It analyses alternative scenarios that may limit or counteract the undesirable consequences of current trends.

The report finds that:

Title: Demographic Scenarios for the EU - Migration, Population and Education

The Centre of Expertise on Population and Migration (CEPAM),is a collaboration between IIASA’s World Population Program and the JRC and was launched to provide comprehensive assessments of the drivers of possible future migration to Europe and study the implications of alternative future migration scenarios that could help to inform European policies from 2019 onwards. In 2018, CEPAM launched their first book presenting an essential background study for that work.

The book entitled "Demographic and human capital scenarios for the 21st century" was produced by IIASA together with the European Commission’s Joint Research Centre (JRC) under the leadership of Lutz. It examines potential future scenarios on population trends across the world, taking into account migration, fertility, mortality, education, and labor force participation. The work was conducted in the framework of CEPAM.

Centre of Expertise on Population and Migration (CEPAM)