IIASA researcher Sergei Scherbov will contribute to this year's Gaidar Forum in Moscow. The Forum is the major annual international scientific conference in the field of economics in Russia. 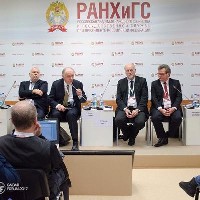 Traditionally at the beginning of the year, in Moscow, in the Russian Presidential Academy of National Economy and Public Administration (RANEPA), famous scientists, representatives of authorities, public and political figures, businessmen from different countries come together. The Gaidar Forum annually brings together all those, whose latest achievements have an impact on the social-and-economic development of regions and states.

In the Russian media, the Gaidar Forum has gained the unchallenged reputation of ‘the Russian Davos Forum’. For foreign visitors, the Forum is an important source of information on major trends in social-and-economic and political development, status of business environment and investment climate of Russia, while for domestic experts, the participation in the Forum makes it possible to determine the prospects for further economic growth and integration of Russia into the global economy.

World Population Program (POP) Deputy Director Sergei Scherbov will be one of the speakers at this event. In the last years, the Gaidar Forum was an important forum to share IIASA research on Russia with relevant policymakers. Whole sessions were dedicated to Russian Demographic Data Sheets (see box below) where experts discussed the comparison of regional demographic data with other countries; the possibility of using the Human Life Indicator, an alternative new measure to the Human Development Index that takes into account differences in life expectancy developed at IIASA; evaluation of regional demographic development; Russian regions’ population projection until 2050; and population differentiation of Russian regions.

This year will be a continuation of this tradition. Scherbov will be speaker during a session on population projections in Russia. He will discuss scientific and applied reporting with a regional perspective. The session is part of conference part 2, the scientific expert program and will take place on day 1, January 15, 2.30-4.30PM.

Russia is a founding member of IIASA with forty-five years of continuous intensive cooperation resulting in a range of academic and science to achievements (see box below for examples of recent collaborations).

The Russian Demographic Datasheet 2019, a collaboration between POP at IIASA, RANEPA and the Russian Federal State Statistics Service (Rosstat) will be launched at the Gaidar Forum 2019. For the second time, key demographic indicators and main population trends for all subjects of the Russian Federation, including population projection for 2050 are comprehensively presented in one data sheet. Special attention is given to the importance of alternative indicators of population aging for the current and future population changes across Russia.

This year, the data sheet is accompanied by an extended brochure, that shows key demographic indicators and main population trends for all Subjects of the Russian Federation, their rankings within Russia, and comparisons with those countries that have the closest value of each indicator. It features the Human Life Indicator (HLI), a new and simple measure for human wellbeing across countries, that takes inequality into account and could replace the commonly used but error-prone Human Development Index (HDI). The HLI was only recently introduced by Ghislandi, Sanderson and Scherbov in Population and Development Review.