For his scientific contributions Wolfgang Lutz was awarded the 2016 prize for Humanities, Cultural Studies, Social Sciences and Law of the City of Vienna. 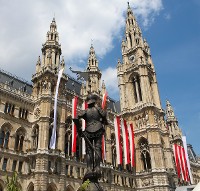 Every year the city government of Vienna awards prizes in the fields of architecture, fine arts, literature, music (composition), journalism, science and national education, to honor individuals for their lifetime achievement. These awards emphasize the significance of Vienna and Austria as global places that treasure and cultivate arts, science and national education. Individuals or teams are awarded by the major of Vienna on the basis of recommendations by an independent expert panel.

IIASA World Population Program Director Wolfgang Lutz was awarded the 2016 prize for Humanities, Cultural Studies, Social Sciences and Law. Lutz has worked on family demography, fertility analysis, population projection, and the interaction between population and environment. During his long career, he has conducted a series of in-depth studies on population-development-environment interactions in Mexico, several African countries, and Asia, has authored a series of world population projections produced at IIASA and has developed approaches for projecting education and human capital. The latest set of population projections was published in 2014 in a massive volume with 1056 pages entitled “World Population and Human Capital in the 21st Century” (eds. W. Lutz, W. Butz and Samir KC). This effort include projection results for all countries in the world by age, sex and level of education and is currently likely the most comprehensive assessment of the global state of knowledge about future population and human capital trends.

The price in humanities of the City of Vienna is awarded since 1947. For a full list of awardees please visit the City of Vienna website. The official ceremony will take place on 9 November 2016 at the Vienna City Hall in Autumn.