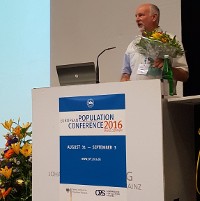 At this year's European Population Conference in Mainz, Germany, IIASA World Population Program Director Wolfgang Lutz was awarded the 2016 award based on his exceptional life time achievements. Selected by the Council of the EAPS that serves as Jury for the EAPS Award for Population Studies, it was presented by Honorary President of the EAPS Charlotte Höhn.

Since 1984 at IIASA, Lutz has worked on family demography, fertility analysis, population projection, and the interaction between population and environment. During his long career, he has conducted a series of in-depth studies on population-development-environment interactions in Mexico, several African countries, and Asia, has authored a series of world population projections produced at IIASA and has developed approaches for projecting education and human capital. The latest set of population projections was published in 2014 in a massive volume with 1056 pages entitled “World Population and Human Capital in the 21st Century” (eds. W. Lutz, W. Butz and Samir KC). This effort include projection results for all countries in the world by age, sex and level of education and is currently likely the most comprehensive assessment of the global state of knowledge about future population and human capital trends.