For their contribution to research and capacity building at the College of Population Studies, Chulalongkorn University honored Sergei Scherbov and Wolfgang Lutz. 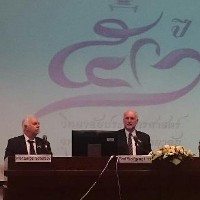 On occasion of the 50th anniversary of the College of Population Studies (CPS) at Chulalongkorn University, IIASA World Population Program (POP) Director Wolfgang Lutz and Deputy Director Sergei Scherbov received an award for their contribution to research and capacity building at CPS.

POP at IIASA and the CPS have a long tradition of collaboration particularly in the research fields of aging and climate change adaptation with a focus on Asia. The collaborative activities include the organization of conferences, such as the seminar "Demographic Differential Vulnerability to Natural Disasters in the Context of Climate Change Adaptation" in 2014 in Kao Lak, the production of Asian Demographic Data Sheets 2008 and 2012, and the establishment of the Asian MetaCentre for Population and Sustainable Development Analysis which has a new headquarter at the Institute for Asian Demographic Research (ADRI) in Shanghai since June 2016. All initiatives were headed by Wolfgang Lutz. Since 2002, Sergei Scherbov has conducted “hands on” courses in the field of demographic analysis, new methods and concepts in demography, population projections, and computer applications with a focus on aging societies for junior scientists and early-to mid-career professionals from around the world at the CPS to share IIASA research with an international audience.

Wolfgang Lutz and Sergei Scherbov were invited keynote speakers at 50th anniversary  celebration. Lutz outline the past and future prospects of human capital in Asia, one of the key research fields at POP. Scherbov gave a presentation on the opportunities and challenges of world population aging, covering the trends during the past 50 years as well as forecast for the next 50 years and the role of demography in the context of aging society.

Half a century of Thai population and world population