The Centre of Expertise on Population and Migration is a research partnership between IIASA's World Population Program and the European Commission's Joint Research Centre that provides science-based knowledge on migration and demography to support EU policy. 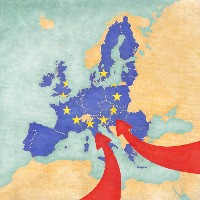 Launched in June 2016 in the framework of the European Commission's Knowledge Centre for Migration and Demography, the Centre of Expertise on Population and Migration was created in response to a need for strengthening demographic expertise with the European Commission with a specific focus on implications of migration. At JRC the Centre will be hosted by the new Scientific Development Unit in Ispra.

The basic rationale for the creation of the new Centre is that the EU member states need not only deal with short-term challenges in the context of the refugee crisis but also have to understand the longer term implications in the context of an ageing population. Against this background, the Centre will conduct research on the likely longer-term impact of alternative migration scenarios on the changing structure of Europe’s population by not only considering age and sex but also education and labor force participation. For selected EU countries it will also conduct scenarios according to place of birth, religion, language use and other social dimensions. The Centre will also produce alternative scenarios for future conditions in potential sending countries in Africa and Western Asia that may result in out-migration pressures.

The new research partnership is co- headed by IIASA World Population Program Director Wolfgang Lutz, also the founding director of the Wittgenstein Centre for Global Human Capital (IIASA, VID/OEAW, WU), and by Delilah Al-Khudhairy, Director of policy Support Coordination at the JRC. The Centre of Expertise on Population and Migration is initially funded for three years. The research staff will include five postdoctoral fellows who will work at IIASA, and five demography experts stationed at JRC-Ispra.

A new flagship report from IIASA and the European Commission’s Joint Research Centre (JRC) examines the key factors that will shape European demographics over the coming decades. By examining not only the role of migration, fertility and mortality, but also education levels and labour force participation rates, a more comprehensive view of possible futures can be outlined than the conventional demographic projections allow for. The first five sections of this report focus on demographic challenges inside the EU, such as population ageing, a shrinking labour force, more non-working people being dependent on working people, and showing the impact of high levels of emigration in some EU Member States.

With these challenges in mind and with a view towards 2060, the report builds scenarios to understand the long-term effects of changes in key trends, and whether undesirable consequences can be limited or counteracted. As the EU and its demographics do not exist in isolation, the following sections explore the relevant trends for world demographics and for migration flows.

Knowledge Centre for Migration and Demography

Demographic scenarios for the EU: Investigating the role of migration

Launch event: Centre of Expertise on Migration and Demography

Is there a demographic need for migration in Europe?