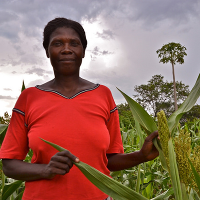 Rotating crops with soil-enhancing legumes could help ensure food security for the future in sub-Saharan Africa, according to new IIASA research published in the journal Environmental Research Letters--even as climate change puts more pressure on agriculture in the region. Researchers say that climate change over the next century would decrease crop yields across sub-Saharan Africa under present agricultural practice or conventional intensification, because of increased temperatures, changed precipitation patterns, and soil erosion and nutrient depletion.

The new study, led by IIASA researcher Christian Folberth, simulated the production of maize, one of the most important food crops in the region, under a range of climate scenarios and intensification strategies. It shows that rotating maize with long maturing or perennial crops in the legume family could restore soil nutrients and increase crop yields, helping to mitigate the impacts of climate change. However, if temperatures increase to highly adverse levels, such eco-intensification approaches will not be much help, and other solutions like crop choice and breeding or irrigation will play a bigger role in adapting agriculture to climate change.

”After a flood is really just before the next flood"

The mutually reinforcing relationship between disasters and development is the missing link for community disaster resilience, according to a new report by IIASA researchers, with  Zurich Insurance Group, and the Wharton School, Operationalizing Resilience Against Natural Disaster Risk: Opportunities, Barriers and A Way Forward. The report is one of the first results of a unique collaboration with Zurich, Wharton, the International Federation of Red Cross and Red Crescent Societies, and Practical Action.

“The field of disaster risk analysis and management is confronted by numerous challenges stemming from an approach which is dominated by disaster response and recovery. This approach neglects risk reduction and broader interventions in socioeconomic conditions, and ignores long-term consequences for societies and the environments which sustain them,” says IIASA researcher Adriana Keating, who led IIASA’s contribution to the report. Left unchecked, the challenges of disasters are likely to be amplified by population growth, urbanization, and climate change. The report suggests that such drivers could have a devastating impact on socio-economic objectives, particularly in developing countries where disasters can trap communities in a vicious cycle of poverty. Read More>>


IIASA’s World Population Program has released a new set of population projections for 49 European countries, USA, and Japan from 2013 to 2050. The data include not just age and population numbers, but also educational level, fertility, aging, mortality, and migration rates. It shows that the biggest variable influencing future population growth to 2050 will be migration. The updated data also uses new measures of aging developed by IIASA researchers.