IIASA researchers are presenting new research on deforestation, disaster response and adaptation, land use change, crowdsourcing and games, at the European Geophysical Union meeting in Vienna this week. 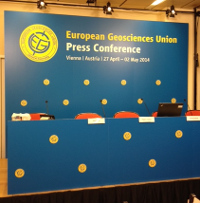 New IIASA research shows that REDD+ efforts in the Congo have the potential to not only reduce emissions, but at the same time, preserve forest biodiversity and rural people’s livelihoods. While much of the large rainforest in the Democratic Republic of the Congo has been well preserved, it is increasingly under pressure from population growth and increasing development.

Tuesday, 29 April 2014
Preparing for multiple disaster risks
Recent natural catastrophes, such as the Tohoku earthquake of 2011, showed that some disasters like an earthquake, could trigger another disaster, like a tsunami or a nuclear meltdown. At EGU, IIASA’s Nadejda Komendantova will present new results from the study on governance of natural hazards, including not only risk assessment, but also its communication from science to policy and implementation in different governance structures. The new research, based on case studies and interactions with stakeholders in Italy and France, examined the differences between centralized versus less centralized approaches to risk management. In France, the government is centralized with authority at the national level. In Italy, regions have more autonomy to make their own decisions. The study shows strengths and weaknesses of both approaches, and provides recommendations for multiple disaster risk governance.

Wednesday, 30 April 2014
Cropland Capture game provides a wealth of crowdsourced data
IIASA researcher Steffen Fritz will present the first results and experiences from IIASA’s crowdsourcing game, Cropland Capture, which ends its first six month data collection period on 9 May. The game asks players to identify high-resolution satellite images or photos of the Earth as farmland or not. Players have validated more than 4 million square kilometers of land cover. Researchers are now using the data to build a new and improved map of global cropland. Don’t miss Steffen Fritz in a press conference on Thursday, 1 May, 10:00 (Livestream available). More information: http://media.egu.eu/

Wednesday, 30 April 2014
Forensic analysis of an earthquake and its impacts
On 12 May, 2008, a 7.9 Mw earthquake devastated the region near the Wolong National Nature Reserve in China, a World Heritage and global biodiversity hotspot area that is most famous for hosting the largest population of Giant Pandas. While the reserve itself suffered less direct damage than many surrounding areas, its recovery has been surprisingly slow. Why has recovery been so slow in such a flagship protected area with high level of national and international attention? IIASA researcher Wei Liu went there to find out, interviewing various groups of stakeholders, including reserve managers, government officials, and a sample of over 200 local households. In addition to some natural factors, such as increased flooding, landslide, and debris flow since 2008, Wei found a number of non-natural causes behind the predicament, related to risk awareness, policies, and economics.

Thursday, 1 May 2014
The growing impact of fertilizer imbalance
Growing imbalances in soil nutrients such as nitrogen and phosphorus could lead to decreased crop yields in Africa, according to new IIASA research to be presented at EGU. A growing body of research shows that it is not just the amount of fertilizer that matters to crop growth, but also the relative ratios of nutrients including nitrogen—which is abundant and cheap—and phosphorus, which is prohibitively expensive for many farmers in Africa, and growing ever scarcer. The new work to be presented at EGU shows that phosphorus use would need to increase as much as ten times current levels in order to close current yield gaps. However, the researchers say, even a small increase of phosphorus use could help improve crop yields and prevent food scarcity in Africa.