Policy Brief #03, August 2008. Recently published research carried out by IIASA in collaboration with the Vienna Institute of Demography (VID) of the Austrian Academy of Sciences proves that education is a fundamental determinant not only of health, demographic trends, and individual income, but also of a country’s aggregate level of economic growth. This gives policymakers a new perspective on international education goals. 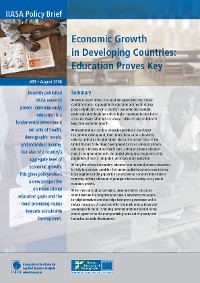