Negotiating with Terrorists: A Mediator’s Guide 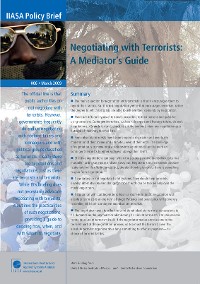