Reducing Emissions from Deforestation and Forest Degradation: A Systematic Approach

Policy Brief #08, December 2009. As up to 20 percent of global anthropogenic greenhouse gas emissions result from deforestation, the reduction of emissions from deforestation and degradation of forests (REDD) is a major theme of the ongoing negotiations under the UNFCCC. This briefing looks at the fundamental issues and the challenges involved in current proposals to implement a trading scheme for REDD credits. 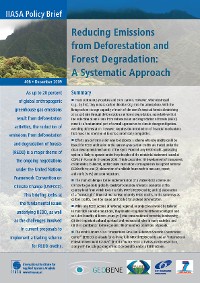