Policy Brief #09,  December 2009. IIASA has developed an easy-to-use online calculator to help industrialized countries compare efforts to lower greenhouse gas (GHG) emissions with those of other countries. The calculator is designed to explore alternative schemes for sharing the burden between countries, and it can help industrialized countries identify a mutually agreeable set of GHG emission reduction targets. 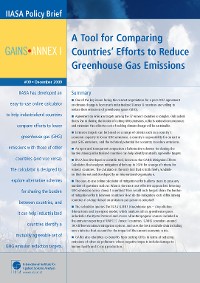