Between 1.5°C and 2°C — analyzing the global warming targets 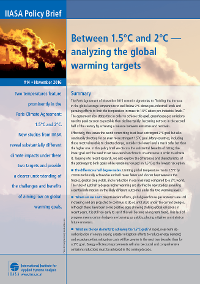 The Paris Agreement of November 2015 commits signatories to “holding the increase in the global average temperature to well below 2°C above pre-industrial levels and pursuing efforts to limit the temperature increase to 1.5°C above pre-industrial levels.” The agreement also states that in order to achieve this goal, greenhouse gas emissions need to peak as soon as possible then decline rapidly, becoming net-zero in the second half of the century by achieving a balance between emissions and removals.

Effectively, this leaves the world committing to at least a stringent 2°C goal but also continually shooting for an even more stringent 1.5°C goal. Many countries, including those most vulnerable to climate change, consider the lower level a much safer bet than the higher one. In this policy brief we discuss the substantial benefits of hitting the lower goal and the need to set near-term benchmarks on emissions in order to achieve it. Tapping into recent research, we also explore the differences and characteristics of the pathways to both goals while remaining focused on 1.5°C as the lowest risk option.

IIASA Policy Briefs present the latest research for policymakers from
IIASA—an international, interdisciplinary research institute with National
Member Organizations (NMOs)
in 24 countries in Africa, the Americas,
Asia, Europe, and Oceania. The views expressed herein are those of the
researchers and not necessarily those of IIASA or its NMOs.