Policy Brief #17, July 2018. Jordan is entering a critical phase in terms of planning its future electricity supply architecture. The results of a four-year collaborative study by researchers from IIASA, Jordan, and Sweden, has led to the development of several recommendations for the Jordanian energy-policy process. 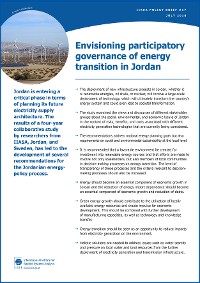 The Hashemite Kingdom of Jordan has set targets for
climate change mitigation and energy security policies.
These include satisfying growing Jordanian energy
demand with sustainable energy supply, while reducing
dependency on energy imports that are volatile and
prone to political risks.

The deployment of new infrastructure projects in Jordan, whether it is renewable energies, oil shale, or nuclear, will involve a large-scale deployment of technology, which will ultimately transform the country’s energy system and could even lead to societal transformation.The study discussed in this brief examined the views and discourses of different stakeholder groups about the social, environmental, and economic future of Jordan in the context of risks, benefits, and costs associated with different electricity generation technologies that are currently being considered. The results indicate that the majority of stakeholder groups perceive the social, environmental, and economic future of Jordan as positive, but perceptions about the country’s social future were more polarized, as there are concerns that current changes in society will destroy traditional family and value systems.Policy Brief recommendations address national energy planning goals but also requirements on social and environmental sustainability at the local level. Jordan’s energy transition should be seen as an opportunity to reduce impacts from electricity generation on the environment and change human behavior to reduce pressure on the environment due to the increased level of awareness and availability of new technologies.