Policy Brief #30, October 2021. Overshooting global temperature goals is risky. New research from the ENGAGE project shows the long-term economic benefits of scenarios that avoid overshoot and points out the investments needed to make it happen. 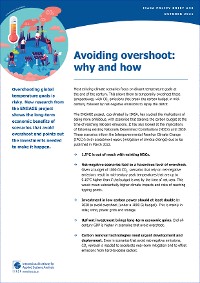 Most existing climate scenarios focus on distant temperature goals at the end of the century. This allows them to temporarily overshoot those temperatures, with CO2 emissions that break the carbon budget in mid-century, followed by net-negative emissions to repay the deficit.

The ENGAGE project, coordinated by IIASA, has studied the implications of being more ambitious, with scenarios that balance the carbon budget at the time of reaching net-zero emissions. It has also looked at the implications of following existing Nationally Determined Contributions (NDCs) until 2030. These scenarios inform the Intergovernmental Panel on Climate Change (IPCC)’s sixth assessment report (mitigation of climate change) due to be published in March 2022.

Meeting the Paris goals will require a transformation in energy systems. To explore how this might be done, integrated assessment models (IAMs) calculate scenarios that limit global warming through a portfolio of emissions cuts and land use change ̶ all optimized for low cost.

In most such studies, temperature goals must be met only in 2100, allowing scenarios the freedom to temporarily overshoot those goals. This is the lowest-cost approach across most scenarios, notably those in the IPCC’s Fifth Assessment Report and Special Report on Global Warming of 1.5°C.

These scenarios rely heavily on net-negative emissions later in the century, to reverse the overshoot. CO2 removal on such a large scale puts a burden on later generations, and may turn out to be unsustainable or unfeasible (see IIASA policy brief No. 29). 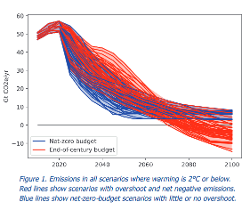 To explore the implications of being more ambitious, the ENGAGE project compared two approaches: traditional emissions pathways that focus only on end-of-century temperature goals, versus pathways that explicitly put a limit on peak temperature.

Peak temperature depends mainly on the total cumulative CO2 emitted when the world reaches net-zero emissions. Each pathway in the second set requires that the carbon budget is met at the time of net-zero, with little or no overshoot. (A small overshoot can occur due to other greenhouse gases.)

Nine modeling teams fed these pathways into different IAMs to generate mitigation scenarios, revealing the consequences for climate and economics.

IIASA research results indicate that scenarios with a carbon budget of 1000 Gt CO2 show end-of-century warming of 1.7-2.1°C. Among these, scenarios relying on net-negative emissions have peak temperatures up to 0.15°C higher than those without.

This is a considerable climate risk, liable to expose many millions more people to climate extremes, and increasing the risk of climate tipping points and other changes that cannot be readily reversed. According to the IPCC Special Report on Global Warming of 1.5°C: “Overshooting poses large risks for natural and human systems, especially if the temperature at peak warming is high, because some risks may be long-lasting and irreversible, such as the loss of some ecosystems.”

IIASA researchers also looked at variants of these pathways where emissions follow current NDCs until 2030. In every case, this puts a 1.5°C world out of reach. The late start means it is simply impossible to scale up decarbonization quickly enough. The lowest attainable peak temperature is 1.6 to 1.9°C.

Another study took a detailed look at the investments needed to transform the energy system. Scenarios with a 1000 Gt budget require annual investment in low-carbon energy from 2025 to 2030 to be at least twice as high as 2020 levels. Most of this is in solar, wind, power grids, and storage. In all scenarios that limit peak warming to below 2°C, coal is phased out quickly, with considerable reductions in oil and gas.

As well as decarbonizing the power system, this allows other sectors to be cleaned up. Where possible, that will be through direct electrification. In hard-to-abate sectors such as heavy industry it will mean using renewable power indirectly, requiring considerable investment in green hydrogen. 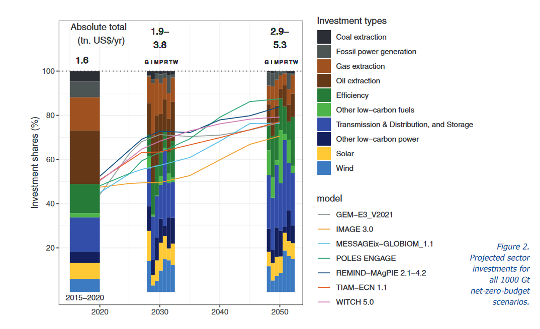 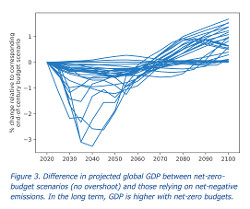 Avoiding overshoot brings long-term economic benefits. Over the next few decades, the cost of ambitious early mitigation means that global GDP is projected to be lower than in net-negative pathways. In the latter half of the century, this is however reversed, with GDP higher in pathways that avoid net negative CO2 emissions and do not overshoot. That is partly because overshoot scenarios must keep raising the price of carbon to maintain net-negative emissions.

This is a conservative conclusion, as it does not include the economic impact of climate change. That impact would reduce GDP more in overshoot scenarios, making a stronger case for accelerated action. 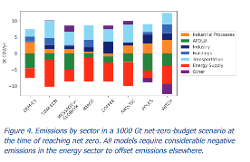 Carbon removal is still needed. Even in scenarios that do not reach for net-negative emissions, removing CO2 from the atmosphere accelerates mitigation in the near term, and offsets residual emissions in hard-to-abate sectors such as cement manufacturing. In these scenarios, models project carbon removal of 5 to 10 Gt per year at the time of net-zero under a 1000 Gt budget. Some models favor afforestation and reforestation; some favor removal technologies, especially bioenergy with carbon capture and storage; some prefer a balance between the two.

ABOUT THE ENGAGE PROJECT

ENGAGE (Exploring National and Global Actions to reduce Greenhouse gas Emissions) is funded by the European Commission under Horizon 2020 (Grant Agreement No. 821471). It has a consortium of international and multidisciplinary leading research groups that aims to co-produce knowledge for designing cost-effective, technologically sound, socially, and politically feasible pathways that can meet the objectives of the Paris Agreement. ENGAGE will also quantify avoided climate change impacts at the regional and national levels and identify concrete policy portfolios that maximize co-benefits and minimize trade-offs.