Options Summer 2018: Water scarcity in Asia is likely to get worse over the coming decades, and new research from the IIASA Water Program has shown that increased water demand due to socioeconomic development is likely to be the main cause in large parts of the continent. 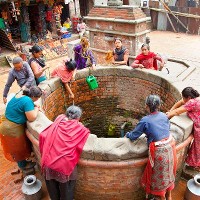 Asia is currently home to 4.5 billion people, who use around 65% of the world’s water supply. Around 30% of the Asian population is already facing water scarcity. India and China have experienced close to double-digit GDP growth in recent years, as well as a population boom. Many river basins already cannot cope with the demands placed upon them.

As the effects of climate change really become visible and a continued improvement of socioeconomic conditions cause population numbers to rise still further–with wealthier societies on average requiring more water anyway–what will happen to water supply and demand? Will the problems be worse in some areas than in others? What will exacerbate the situation? Can the problem be reduced?

These are just some of the issues faced by policy makers in Asia today. IIASA Water Program researchers are coming to their aid using multiple hydrological models together with the latest global climate change and socioeconomic scenarios.

Yusuke Satoh and a team of other IIASA researchers were tasked by the Asian Development Bank to evaluate the risks and find out which areas of the continent might be most vulnerable. Understanding potential risks are vital to developing management and adaptation strategies. Although there are studies on future water scarcity under climate change, they are all missing something essential.

“Most existing studies discuss the impact of climate change on water scarcity, but because there were no water use scenarios, they couldn’t assess the impact of changing water demand,” says Satoh.

This is groundbreaking work undertaken by the Water Futures and Solutions (WFaS) initiative as part of the IIASA Water Program.

WFaS was set up six years ago by IIASA, with partners including UNESCO, the International Water Association, and the World Water Council, to look at sustainable solutions to local, national, and global water challenges. It aims to include a wide range of stakeholders, rather than just scientific researchers.

“The biggest feature of WFaS, I think, is stakeholder engagement,” says Satoh. ”In order to include as many potential futures as possible we need more, broader perspectives, and we need stakeholder opinions.”

One of the major achievements of WFaS has been to develop water use scenarios. The scenarios were developed at a WFaS stakeholder meeting and were based on the five existing Shared Socioeconomic Pathways (SSPs) and the four Representative Concentration Pathways (RCPs). The SSP scenarios were originally developed by IIASA researchers to suggest different ways in which the world and society could progress, depending on decisions made by policymakers and society, while the RCPs are the four greenhouse gas concentration trajectories used by the Intergovernmental Panel on Climate Change in compiling its Fifth Assessment Report. IIASA was also involved in the development of the RCPs.

“The SSP and RCP scenarios do not include information on water use, because their interest is emissions,” explains Satoh. “What we did, is develop water use scenarios to make projections for water security.” Each scenario is a combination of an SSP and an RCP.

“For each combination of SSP and RCP, we assumed water use change according to socioeconomic change. In SSP1, society will make an effort to improve water use and regulation, and there will be rapid technology change. Depending on socioeconomic growth, water demand is likely to increase. On the other hand, we assume water use efficiency will improve, thus alleviating rapid water demand growth. We created storylines for each scenario with the stakeholders,” says Satoh.

They selected three comparable combinations as water use scenarios, dubbed ‘sustainability’, ‘middle of the road’, and ‘regional rivalry’. Each of these narratives was translated into quantitative measures and used to build the scenarios into the modeling framework. In the scenario development process, a unique method, called hydro-economic classification, was applied. Countries and regions were categorized into four groups, based on their likely water scarcity problems and their ability to cope. Then, what the researchers considered to be reasonable assumptions were made. For example, a rich country with high levels of water scarcity will be better placed to cope than a poor one.

“Using three global hydrological models we projected water consumption and demand. The models also project the available water resources (supply). Using the framework, we assessed water scarcity for each scenario, using a number of indicators,” says Satoh. “We projected how many people might be affected and how the hydro-economic classification for each country might change over time.” 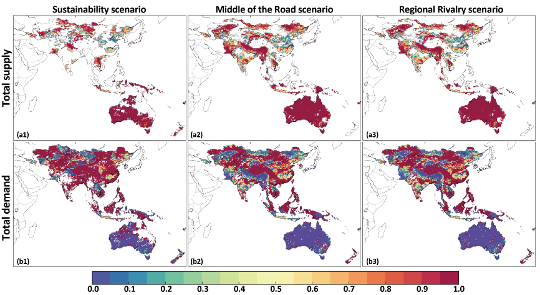 Attribution ratio of increases in the withdrawal to availability ratio for supply side (a), and demand side (b). A value of 0 indicates no impact of that factor on water scarcity, while a value of 1 indicates that water scarcity is totally driven by that factor. (Satoh et al, 2017)

Not a pretty picture

Climate change has long been accepted as the major cause of water scarcity, but some of the results surprised the researchers.

“One of the biggest findings in this study is that demand change can be more significant than climate change over many parts of Asia,” says Satoh.

This is the first time that socioeconomic changes have been identified as the main driver of water scarcity. Water demand for agriculture, industry, and households will increase by 30-40% by 2050 compared to 2010. By the 2050s, water demand in Asia is projected to be larger than all the other continents of the world put together.

Agriculture remains the largest user of water. Seasonal variations, such as extra irrigation in the dry season, further exacerbate the problem of water scarcity in Asia. However, even under the middle of the road scenario, a fifth of Asia will experience severe water scarcity in every season.

Of course, not all regions will be equally affected. According to the model projection, the areas with the most pronounced water scarcity in 2050 will be the same as now–Afghanistan, China, India, and Pakistan. The impacts of water demand increase are particularly pronounced in areas with megacities, such as northern-, coastal-, and southern China.

East and South Asia will see the largest growth in water demand by 2050, accounting for 80% of water use. Growing incomes, increased per capita water use, population growth, and urbanization, will particularly cause a rise in China, India, Indonesia, and Pakistan.

In contrast, under the sustainability scenario, areas including eastern Australia, Malaysia, and Myanmar will see lowered water scarcity.

According to the hydro-economic classification used by the researchers, the most vulnerable countries will be Afghanistan, Azerbaijan, and Pakistan due to their lower economic ability to cope with the challenges of water scarcity. 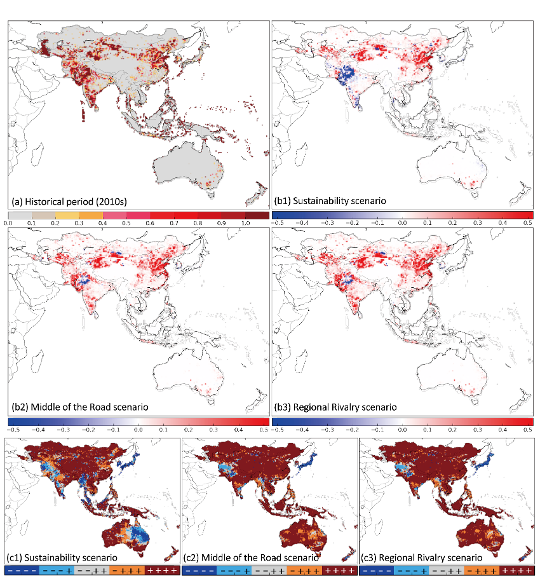 Withdrawal to availability ratio in the 2010s (a) compared to the projected ratio in the 2050s under each scenario (b1-3). In (c), blue indicates a continual decrease in the ratio, red a continual increase, orange a decrease for three decades followed by an increase, and light blue indicates an increase for three decades followed by a decrease. (Satoh et al, 2017)

The researchers designed their scenario-based approach to provide important insights to policymakers on the scale of the potential problem of water scarcity. The initial target of the study was decision makers and investors in Asia, but Satoh says that the findings of the study will be of interest and relevance to any decision makers looking at water use on a global scale. He believes the projections relating to water demand will be particularly useful to decision makers and investors who currently only have supply projections. The results, the researchers say, highlight the clear need for more work on water demand and its management.

While water availability is to a certain extent determined by weather patterns, as technology advances, we would be able to do more. Desalination and water transfer are two options to artificially enrich local water supply. Desalination becomes ever cheaper and more efficient, and already supplies water to some water-stressed areas of the world, although it is only useful in coastal regions and is dependent on socioeconomic conditions. Water recycling technologies and schemes are also important. Improving water management, such as better planning in reservoir operations and adjusting irrigation periods in agriculture, play an important role in regions that have significant seasonal variability.

Managing demand is still the most important tool available to reduce scarcity, as well as the imbalance between water supply and demand. All sectors will need to reduce losses and improve water use efficiency. For example, agriculture uses most of its water in irrigation, of which there are three main forms–flood, sprinkler, and drip. Drip irrigation is the most efficient, but also the most expensive. Satoh and his colleagues assume that due to economic growth in Asia, it will become more affordable, and they expect that the higher efficiency system will eventually become dominant.

The socioeconomic changes, which lead to increased water demand and are the main driver of water scarcity, will need better management and policy interventions through, for instance, better governance and investment in technology and facilities.

The answer to the question posed in the headline then is–not necessarily.

“The message of this study is that we need to change our water use practices, as it has huge impacts on water scarcity. Although climate change is going to affect or intensify water problems, we may be able to adapt or change the situation by changing ourselves. A good recent and topical example was Cape Town in South Africa, which avoided “Day Zero” when water would have been cut off, by people and the city significantly reducing their daily use and demand,” says Satoh.

Rice and reason: Planning for system complexity in the Indus Basin