Options Magazine Summer 2017: Chongqing is a model Chinese city demonstrates economic growth can be achieved without endangering the environment. 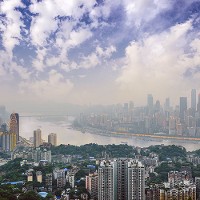 Cities undergoing rapid economic growth often face the challenge of balancing continued growth with their environmental impact. In traditional growth models, the more a city has grown, the greater its environmental impact has been, particularly in carbon emissions.

But in today’s world, that no longer has to be the case. The municipality of Chongqing in China has seen rapid economic growth in the past two decades. Yet Chongqing has not done so at the expense of the environment. In fact, the municipality has even manage to reduce emissions of some pollutants during this rapid growth.

In a study published in the journal Ecological Indicators, IIASA researcher Bing Zhu showed that between 1999 and 2010, the decoupling of Chongqing’s economic growth from its environmental pressure was absolute for emissions of sulphur dioxide, soot, and waste water, while total energy consumption remained the same, as did CO2 emissions and solid waste.

Chongqing’s emissions rate is now below average emissions for all municipalities across China and has had significant impact on economic development. Chongqing even improved its emissions output in the last half of that period, demonstrating that responsible economic growth for global sustainable development is possible.

“Our findings show that you don’t have to contribute more to carbon-based emissions in order to undergo economic growth on a city level,” explains Zhu, coauthor of the new study. “We believe that these findings provide a model for policymakers to use to separate the idea of rapid growth from adverse environmental impact.”